Today we think of Halloween as a children’s holiday, but in Isabella’s lifetime, celebrations of All Hallow’s Eve focused primarily on teens and adults.

Hay rides, parties, and church socials gave single men and women a chance to mix and mingle and, perhaps, meet the special someone they would eventually marry.

Under the watchful eye of trusted chaperones guests played traditional games that centered around romance and love, fate and fortune.

That was exactly the kind of party Sarah Thompson wanted to attend in By Way of the Wilderness.

As a young school teacher Sarah dedicated her life to educating the children in her small town. Although she very much wanted to attend the Halloween party, she found herself forgotten by her neighbors:

They grew to admiring Sarah, being proud of her, boasting of her among themselves, and letting her alone. The first time they seemed actually to forget to invite her to a Halloween frolic, she cried a little. She had not been to any of the neighborhood gatherings for months, she had been so busy; but to be forgotten!

Why was the party so important to Sarah? Perhaps it was because she had fallen in love with Wayne Pierson, the story’s protagonist. The games that were played at Halloween parties in 1900 (when the book was published) might have helped her figure out if Wayne felt the same way about her.

One of the games that might have been played was a variation of bobbing for apples, where the names of the party-goers were scratched into apples before they were placed in separate tubs of water (boys’ names in one tub; girls’ in the other). The apple each guest caught—without using their hands, of course—would name his or her true love.

Sometimes they hung an apple from the ceiling or door frame, and balanced it with a lighted candle. The first person to catch the apple in their mouth (without getting singed by the flame!) would be the first to marry.

In another traditional game a young woman who wanted to know her future husband’s name had to be handy with a knife.

If she could peel an apple or orange in a single, long, winding strip and toss it over her shoulder, the peel would land on the floor in the form of the initial of the man she was to marry.

Players also used walnuts to guess the names of their spouse to be. After writing the names of the guests on walnuts, each person took turns throwing two walnuts into the fire. The walnut shell that cracked first from the heat signified the name of the person they’d marry.

When it came time to serve refreshments, party guests gathered to slice the Halloween cake, which was baked with charms in it. A guest who got a slice of cake with a coin in it could expect a life of wealth; a key meant travel; and a doll meant children. Of course, a ring found in a slice of cake always meant marriage.

Another game was “Bowls of Fate,” where three bowls were filled with colored water: red for good fortune, blue for a trip across the water, and clear for an upcoming honor. Blindfolded guests took turns dipping a hand in one of the bowls (which were rearranged after each person) to learn what their future held.

In other games, mirrors and candles served as props. One variation was for women with strong wills; they walked down the cellar steps backward, with a mouthful of salt, a candle in one hand, and a mirror in the other. If she performed the ritual correctly, the young woman should see the image of her future husband over her shoulder in the glass.

In a variation, at the stroke of midnight a young woman or man had to go to their bedroom with a candle and mirror. If they held both objects correctly and at the right angle, they would see the face of the person they’d marry.

With so many traditional games to play on Halloween, it was no wonder Sarah Thompson was disappointed to realize she would not be attending any Halloween parties.

If you’d like to know if Wayne Pierson ever returned Sarah’s love, you can read By Way of the Wilderness by clicking here. No candles or mirrors required!

Have you ever bobbed for apples or played a variation of any of these Halloween games?

Last week Apple unveiled its new iPhone with the latest innovations in communication technology. Its release came 130 years after Isabella Alden first mentioned the telephone in the plot of one of her novels.

As convenient and indispensable as phones have become in our modern age, the same could be said of telephones in Isabella’s time. In the late 1800s and early 1900s, telephones changed the way Americans lived. 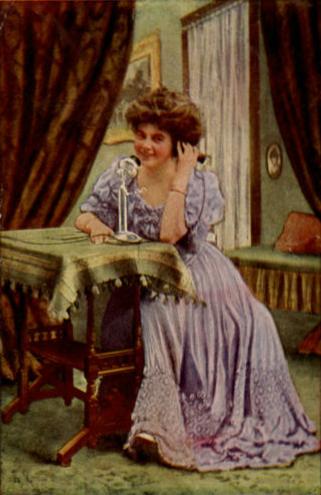 Isabella was 35 years old when Alexander Graham Bell patented his version of the telephone in 1876; but that first model had very limited capabilities.

Although the early Bell telephones certainly transmitted sound, they only worked between two locations that were hard-wired to each other.

Instead of telephone lines being strung between two locations as Bell had envisioned, Coy’s exchanges linked any number of telephones to a single point: a switchboard.

At the exchange, legions of trained switchboard operators used a series of cords and sliding keys to connect and reroute incoming calls to other telephones linked to the exchange.

Thanks to those exchanges, telephone line construction exploded with growth over the next few years. By 1880, there were 47,900 telephones across America. By 1881, telephone service between Boston and Providence was established. By 1892, a telephone line had been constructed between New York and Chicago; and two years later New York and Boston were connected.

Another benefit of those exchanges: jobs. As telephone service expanded, more and more trained switchboard operators were needed to connect calls; and the majority of the operators hired were women.

When Isabella published her novel Eighty-Seven, she included a character who worked as a switchboard operator. Her name was Fanny Porter, and she worked in the Dunbar Street Telephone Office. Another character in the story described Fanny as …

… a bright, pretty girl, young, and quite alone here. She lives in a dreary boarding-house, and used to have some of the most desolate evenings which could be imagined.

Fortunately, not all switchboard operators lived and worked under such conditions. While the majority of switchboard jobs required working for a Bell Telephone Company, there were other positions available. For example, some large businesses that required multiple telephone extensions were equipped with their own exchanges and hired operators to run them.

In fact, businesses were the foremost users of the telephone in the late 1890s. That’s because, in general, phones were too expensive for individual homeowners to install and maintain; but Mr. Mackenzie, the wealthy businessman in Isabella’s novel Wanted, could afford to have a telephone in his home.

In fact, the telephone plays a small but pivotal role in the story. When Rebecca Meredith, the novel’s heroine, first meets Mr. Mackenzie, she thinks he’s hateful and selfish, until she mentions one evening that his young daughter is a little hoarse. To her surprise, Mr. Mackenzie immediately telephones the doctor and …

… administered with his own hand the medicine ordered. Even after the doctor had made light of fears and gone his way, the father sat with his finger on Lilian’s small wrist and counted the beats skillfully and anxiously.

After witnessing his tenderness for his daughter, Rebecca begins to change her opinion about Mr. Mackenzie.

In her 1892 book, John Remington, Martyr, Aleck Palmer was also a young man of great fortune; he, too, had a telephone in his home and business, which caused Mrs. Remington some concern. You see, she was intent on playing matchmaker between Aleck Palmer and her friend Elsie Chilton and invited the unsuspecting couple to dinner without letting either know the other had been invited. As Mrs. Remington explained to her husband:

Elsie is getting to be such a simpleton that I am afraid she would run home if I should let her know he was coming; and as for him, he is developing such idiotic qualities in connection with her, that I feel by no means certain he would not get up a telephone message or something of the sort to call him immediately to the office, if he should know before the dinner bell rang that Elsie was in the house. 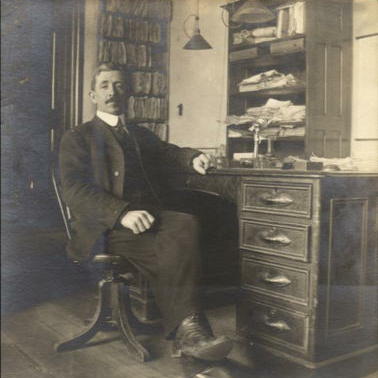 But by the time the 20th Century dawned, the demographics and cost of telephone usage changed dramatically. Telephone companies had connected most major cities and strung sufficient telephone lines across the country to bring costs down, and phone company executives began to set their sights on a new goal: providing service to residential customers.

At first, advertising to consumers stressed the obvious: keep in touch with friends and family.

Then, in 1910 the Bell Telephone Companies developed several strong marketing campaigns that offered different reasons why every home should have a telephone. One campaign was directed specifically at the lady of the house.

The ads had strong visual cues, like this one illustrating how a phone in the home meant a family could summon a doctor quickly:

The series of ads was printed in magazines and on postcards, showing how a Bell telephone …

… keeps travelers in touch with home …

… guards the home by night as well as by day … 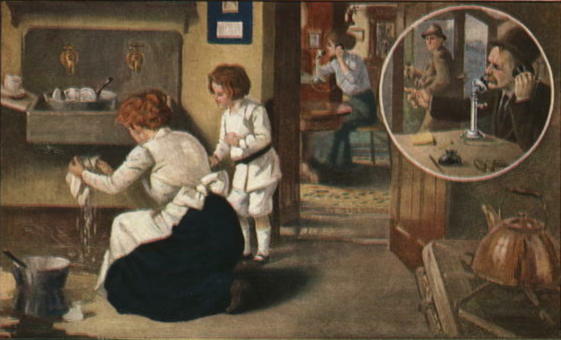 … relieves anxieties over a loved one … 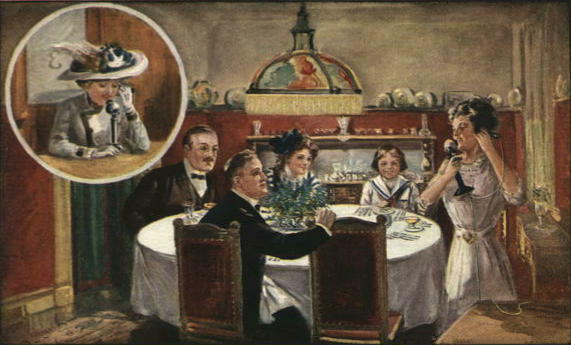 … and quickly helps arrange replacements when servants fail you.

The ad campaigns were extremely successful. People began to think of telephones as an essential tool for the home, instead of a mere convenience. Soon, telephone companies across the country were installing residential telephones at an astonishing pace.

And after each new installation was complete, telephone residential customers notified friends and family of their new phone number by sending out cards like these: 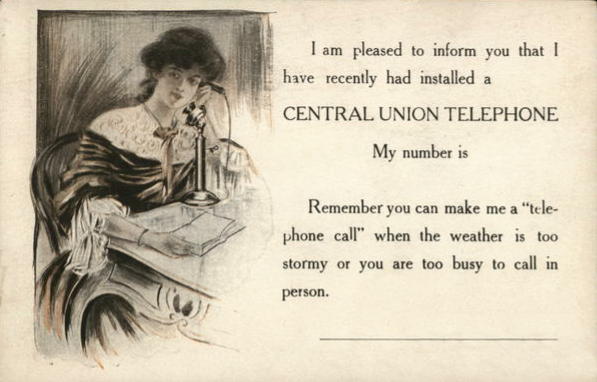 Soon telephones became not only an essential device for the home, but a convenient tool for the lady of the house. In Ester Ried’s Namesake, published in 1906, Ester Randall worked as a cook in the home of the Victor family. And being a stylish family, the Victors, of course, had a telephone, which Mrs. Victor used regularly, as in this scene where she explained to Ester her plans for dinner:

We’ll make the dinner light and easy to manage; just a steak and some baked potatoes and canned corn. Did you say there was no corn? Oh, I remember, you told me yesterday, didn’t you? Well, just phone for it. Call up Streator’s, they are always prompt; tell them they must be. And we’ll just have sliced tomatoes with lettuce for salad; all easy things to manage, you see. As for dessert, make it cake and fruit—strawberries, or peaches, it doesn’t matter which. Why, dear me, that dinner will almost get itself, won’t it?

It’s amazing to think that Isabella Alden saw the development of one of the greatest inventions of the Twentieth Century. In her time the telephone was innovative and exciting. It opened new avenues of jobs for women and changed the way people interacted with each other; and Isabella reflected those changes in her novels and stories that we still read and appreciate today.

You can read more about Isabella’s novels mentioned in this post by clicking on the book covers below: