Isabella Alden strongly believed in spending a few minutes with the Bible every morning; and that even one verse, thoughtfully read, helped fortify and strengthen Believers in their daily walk with God.

Several of her novels were based on that premise, including:

In each story, the main characters committed to memory and relied upon a single verse of scripture every day to help them in their daily lives. She called these stories “Golden Text” novels.

Isabella brought the same concept to The Pansy magazine. In 1895 she began publishing a regular monthly feature in The Pansy called “Daily Thoughts.”

“Daily Thoughts” was printed on the first day of each month, and consisted of a list of Bible verses meant to be read individually, one each day.

She chose each verse carefully, with the prayerful hope that each one would inspire her readers to live their lives for Jesus’ sake.

With each verse she offered a brief comment or question to help her readers better understand the text.

Her verses for January 1895 all came from the book of Psalms. You’ll notice she didn’t print the actual verse, but only gave the citation. She hoped doing so would encourage readers to open their Bibles each day and look up the verses for themselves.

You can click here to open a full-size PDF version of Isabella’s Daily Thoughts for January, which you can use, print, save and share with others.

Please join us again next month to see Isabella’s “Daily Thoughts” for the month of February.

Last week Karen—a long-time reader of this blog—asked a question about the “Golden Texts” mentioned in many of Isabella Alden’s stories, including Gertrude’s Diary and The Exact Truth.

Where can I get one of these booklets that have these Golden Verses in them? Were they distributed in Sunday Schools as part of the materials?

The Golden Texts were a very popular teaching method used by Sunday-schools and missionary societies in the late 1800s.

In those days, almost every major Christian denomination—especially Methodist, Baptist, and Presbyterian—operated a publishing house as one of its departments.

They produced Golden Text lessons in the form of pamphlets and trading cards, which were styled and written for the most part to appeal to children, aged toddlers to teens.

The tradecard-style lesson below is No. 3 in a series about the Golden Texts found in the Book of Matthew. The card was produced by the publishing arm of the Presbyterian Church, and was intended to be used by Sunday-school teachers as a lesson help.

You can see the subscription rate to purchase cards on the reverse side:

Card No. 5 in the series features another Golden Text from the Book of Matthew:

Here’s an example of a Golden Text lesson card the American Baptists produced for their churches and ministries: 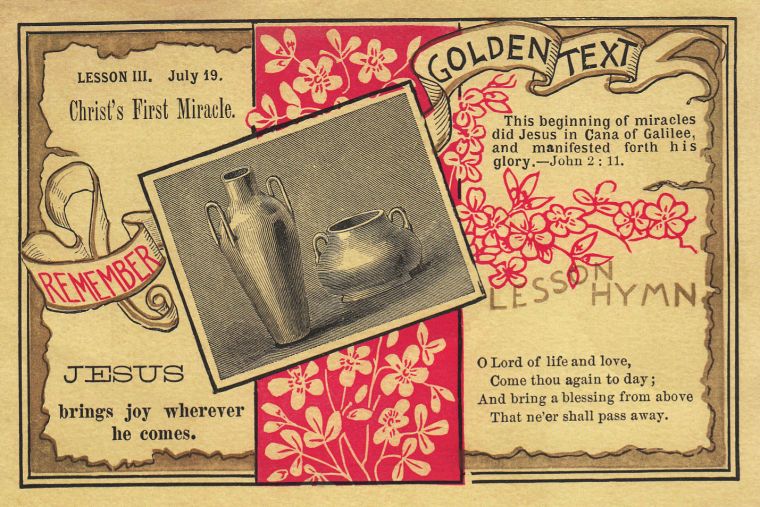 Not all the lessons were printed by churches. The publishing company of Ward & Drummond produced Golden Text lessons in pamphlet form for many years.

This Ward & Drummond pamphlet is bound with a paper boards and feature lovely artwork. The pamphlet measures just 2-3/4” by 4-1/4” so it could be tucked into a boy’s pocket or a girl’s purse. 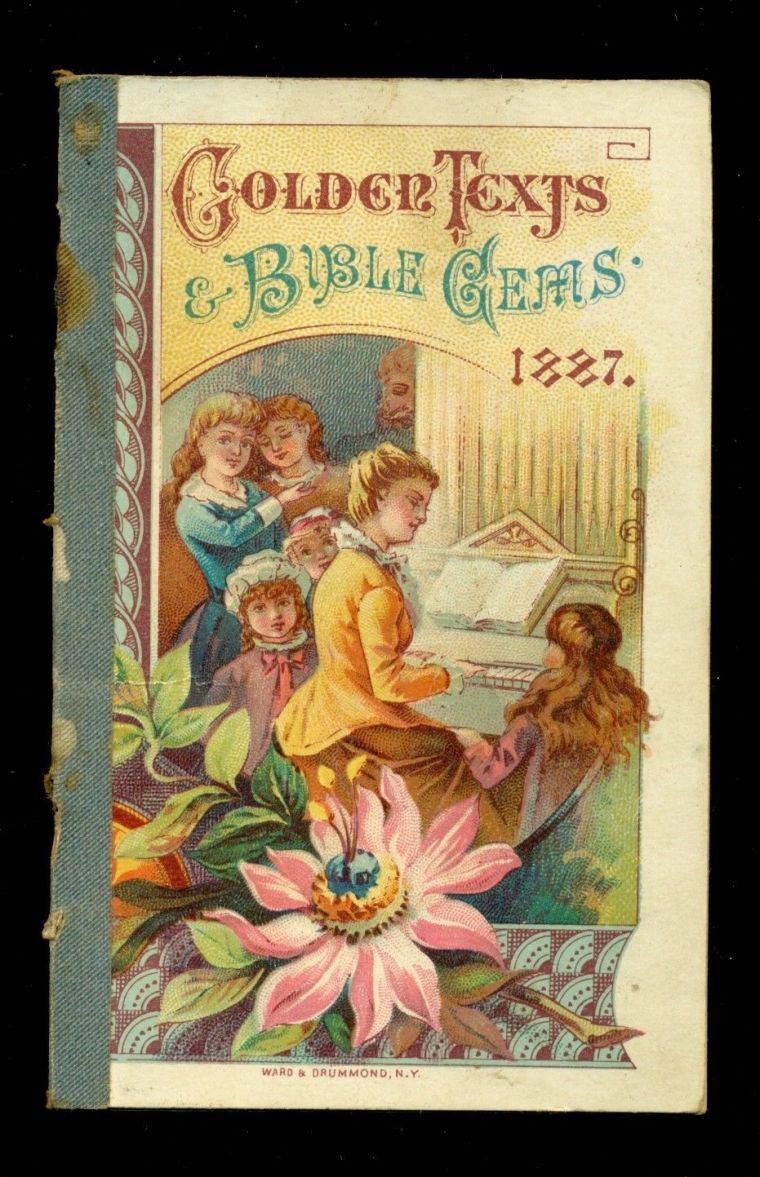 Some good news: This particular Ward & Drummond pamphlet is for sale on ebay! You can click here to see the listing.

It was printed on paper and bound by thread stitches on the spine. It features a Golden Text from Luke 1:46-47:

My soul doth magnify the Lord; and my spirit hath rejoiced in God my Saviour.

You can click on the image to see a PDF of the entire four-page leaflet.

Examples of Golden Text teaching aids—in both leaflet and postcard styles—often come up for sale on sites like ebay and Etsy, so it pays to check back often with both sites.