“Nevertheless, she suffered herself to be persuaded to go for a walk, provided Eurie would go to Palestine….Flossy explained to her that she had a consuming desire to wander along the banks of the Jordan and view those ancient cities, historic now.” (Four Girls at Chautauqua)

Sometimes, I really, really wish I could take the Way Back Machine and latch onto Pansy’s group as they enjoyed the apparently mesmerizing lectures by a flamboyant Middle Eastern-born tour guide named Augustus Oscar Van Lennep. Not content to introduce the lakeside miniature Holy Lands that are a relic of Chautauqua’s Sunday School Assembly days, this enterprising, creative fellow dolled up in “Oriental” costume to give his lectures. That’s our man below, lounging in Rajah-like style, while his indulgent friends retain their upright Victorian postures.

Gus must have had an equally fun set of folks who joined him—witness his jolly crew of costumed believers at Palestine Park in 1875/6-ish. Can you imagine??? Oh, how much fun must that have been!

Alas, today the Park is largely neglected and used more as a family playground than an instructional living map.

I’ve been studying a 1920’s Bible Atlas by Jesse Lyman Hurlbut (Chautauqua lecturer, founding father, and big-time booster) to gain a working knowledge of the Holy Lands. As Dr. Vincent believed, I think understanding the topography and layout, relative distances and terrain of Palestine environs is extremely helpful when reading Scripture. I mean, when you see how far Gideon and his 300 brave soldiers had to track the Philistines, you really do understand why he was so angered when the locals wouldn’t give them any foods to keep their strength up!

According the Pansy’s many charming references to the Palestine Park, students were treated to not only the basic layout, but tiny townscapes and identifying plaques dotted the carefully crafted map. Bible verses connecting each significant stop provided context—and reasserted the importance of the location for the Christ-following traveler.

Today, in an effort to keep the residual charm of the place, small cast iron plaques are embedded along the landscape—they’re kept painted and somewhat landscaped. I understand there’s a “tour” each Sunday night and I hope to attend it someday.

I paced off various Bible place names made familiar by my Old Testament studies and was genuinely surprised to see how concentrated a radius these events encompassed. Here’s Jerusalem in relation to the Mount of Olives, only a stone’s throw from Bethany.

Mount Hermon in the distance provides the perfect “king of the hill” locale for the resort’s kiddie population. The impressive crevasse made me wonder if erosion hadn’t made the Jordan Valley a bit too deep?

“Here we are, on ‘Jordan’s stormy banks…I suppose there was never a more perfect geographical representation than this.” (Four Girls at Chautauqua)

Compared to the vintage postcards you’ll find in this blog’s archived Chautauqua posts (see the links at the conclusion of this post), I’d say the accuracy factor might be off a bit these days.

I found it charming that Jericho was in “ruins”—the flat-topped ancient buildings crumbled and scattered, like those of Hebron (though I’m not certain these ruins were intentional.)

Is someone is tending Jacob’s Well? Even on the dry day I visited, it was filled with water. 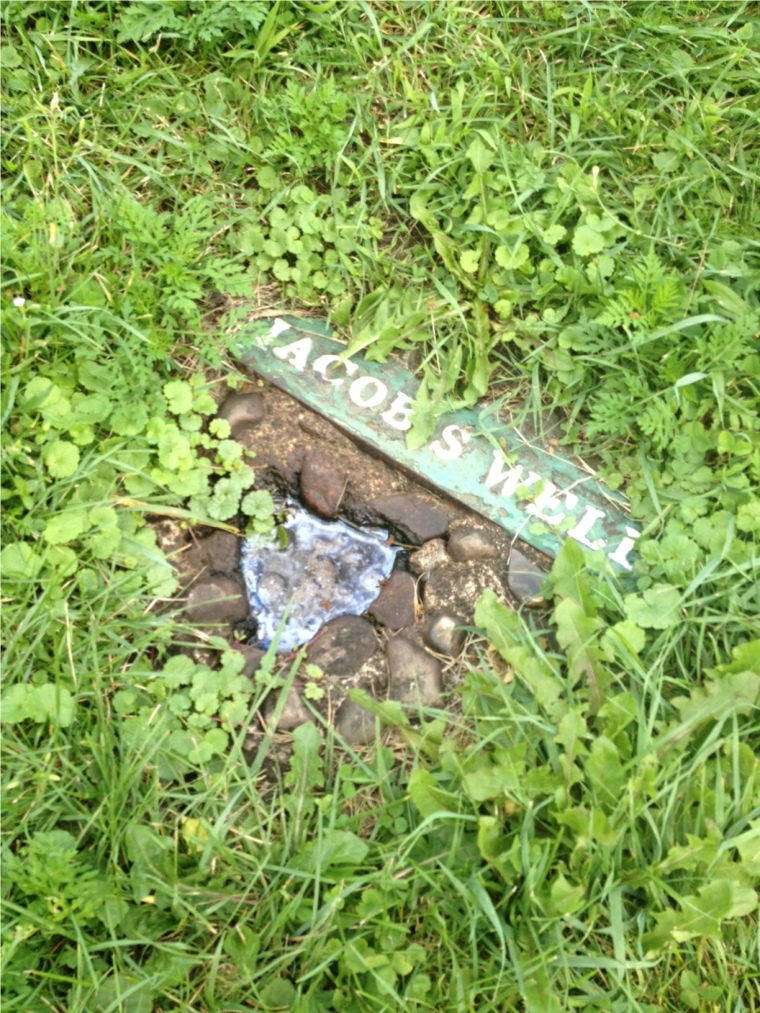 My favorite? The truly little town of Bethlehem. 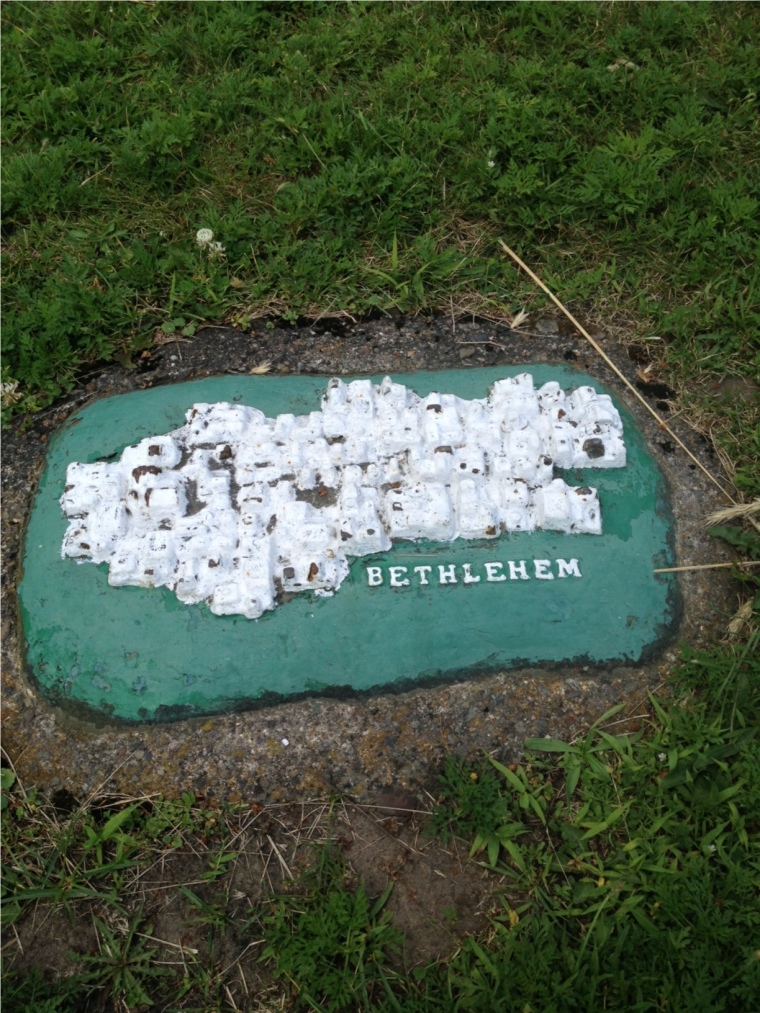 I read the plaque as I exited the park, wistful at the thought of those tent-dwelling Sunday School teachers, nestling eagerly beside the “Mediterranean Sea” and along the shores of the Jordan, to understand more about the lands their spiritual ancestors walked.

What would they make of this rarely visited, gently poignant reminder of the Park’s original purpose? Today, no Bible markers or tablets grace the small stony stand-ins, no tiny replica buildings remain to represent scenes from the life of Jesus as they did in Pansy’s time. I turned my gaze to Chautauqua Lake, imagining the steamer pulling up to the nearby dock and unloading four lively 19th century girls, eager for fun, not knowing they would never be the same, thanks to their time in this beautiful place.

“Now, the actual fact is, that those three people wandered around that far-away land until the morning vanished … They went from Bethany to Bethel, and from Bethel to Shechem, and they even climbed Mount Hermon’s snowy peak and looked about on the lovely plain below. In every place there was Bible reading …” (Four Girls at Chautauqua) 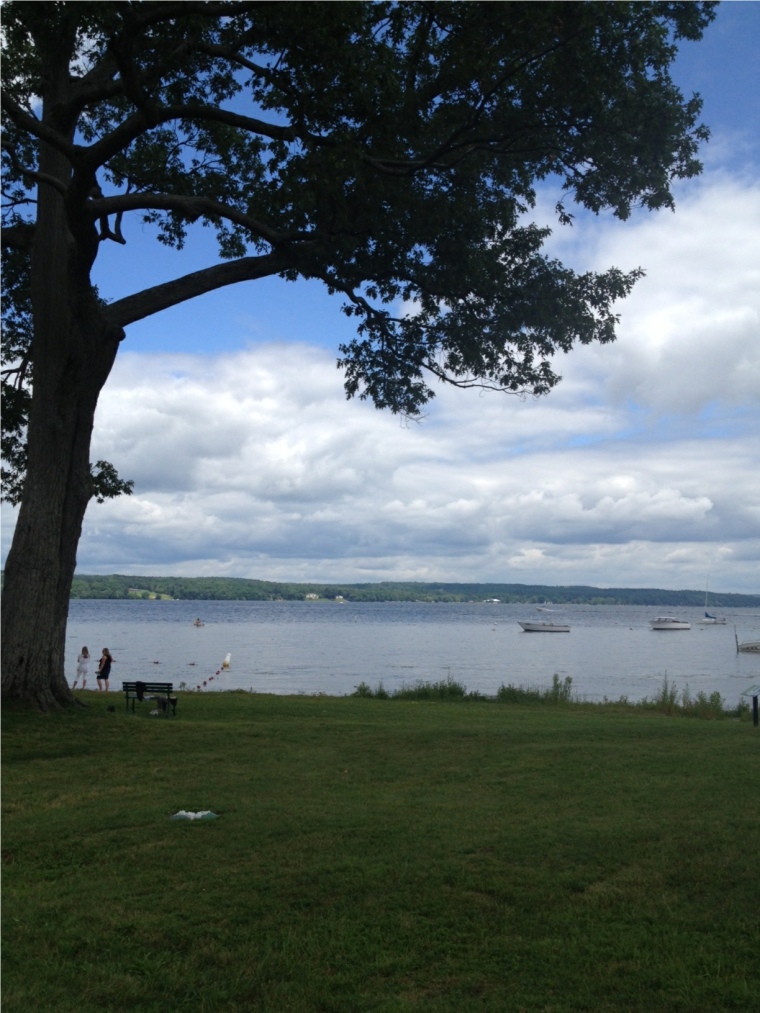 Thanks for allowing me to share these mementos with you of my all-too-brief Chautauqua visit. My hope and prayer is to return soon to follow further in Isabella’s footsteps.

My fascination has led me to launch a tribute Chautauqua Literary & Science Circle reading plan—I’m pairing 19th century texts with contemporary works and next August, I hope to carry the Pansy Year banner in the Recognition Day parade. Interested readers can follow along with my literary journey at my blog, The Hall in the Grove.

Dusting off my sandals,
Karen

If you missed previous posts about Chautauqua Institution, you can read them by clicking on the links below:

Postcards from Chautauqua – On a Pilgrimage

Postcards from Chautauqua – Summer of 2017

A Tour of Chautauqua: Getting There

A Tour of Chautauqua: Strolling the Grounds

A Tour of Chautauqua: Where to Stay

A Tour of Chautauqua: Lectures and Classes

A Tour of Chautauqua: Having Fun

A Tour of Chautauqua: The Teachers’ Retreat

A Tour of Chautauqua: A Healthy Body

A Tour of Chautauqua: Palestine Park

100 Years Ago at Chautauqua

On a small scale, people performed tableaux in parlors. They selected a famous scene from history or literature, donned make-shift costumes, and struck poses while other guests observed.

Isabella Alden was very familiar with tableaux. In Julia Ried Isabella described how guests at a party …

made very free use of the wraps in the dressing-room for our impromptu charades and tableaux, and shawls, cloaks, hoods and rubbers were in inextricable confusion.

On a large scale, churches, women’s clubs and fraternal organizations staged more elaborate tableaux on stages with scenery and props.

There were many books available to help performers turn out their best statue-like performances.

While The Book of Tableaux and Shadow Pantomimes by Sarah Annie Frost featured performances with themes more suitable for adults.

In his book, Parlor Tableaux and Amateur Theatricals, William Gill promoted tableaux as “a simple and elegant amusement,” and “a favorite entertainment of persons with taste.” He recommended that music—vocal or instrumental—be played between representations so the audience would not grow restless and to help heighten the suspense as the audience waited for the curtain to rise on the next scene.

Isabella wrote often enough about tableaux to indicate she was very familiar with the pastime. In her novel A Dozen of Them, young Joseph participated in a simple New Year’s Eve tableau party where he …

… dressed in an extraordinary manner—like a youthful musician of the olden time. Mrs. Calland had managed—nobody but she knew how—to arrange for him a most remarkable wig of soft curling hair. The mustache part was easy; a little burnt cork settled that.

On a larger scale, Julia Ried (heroine in the book of the same name) helped put together a grand tableau of several re-enactments that required weeks of preparation:

I remember an animated discussion that ensued concerning the getting up of tableaux for a certain festival, which was to be held about Christmas time. Mrs. Tyndall gave minute descriptions of the style of dress needed to personate certain characters, and I suddenly became an object of importance, because I had not only seen, but participated in one of the tableaux mentioned, and could give accurate information as to whether the young lady who personated religion should dress in white or black.

Rehearsals and sewing costumes consumed Julia’s days. She helped make costumes for characters portraying Religion, Queen Vashti, Quakers, and a Turkish sultan. Some of the elaborate scenes challenged Julia, because she was convinced they weren’t suitable for Christian women to enact.

Some of the most common themes for tableaux were religious and patriotic scenes. The scenes below, performed by a church in 1920, depict the story of Jesus’s life, from the angel Gabriel’s visit to Mary through his early childhood: 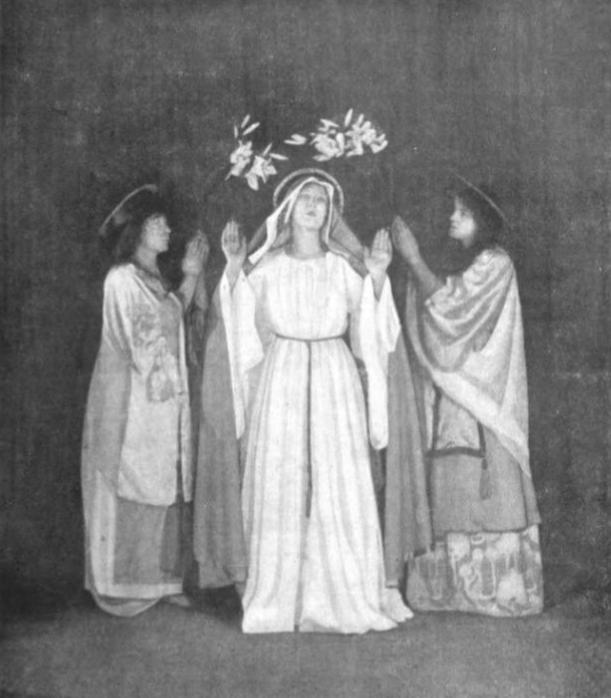 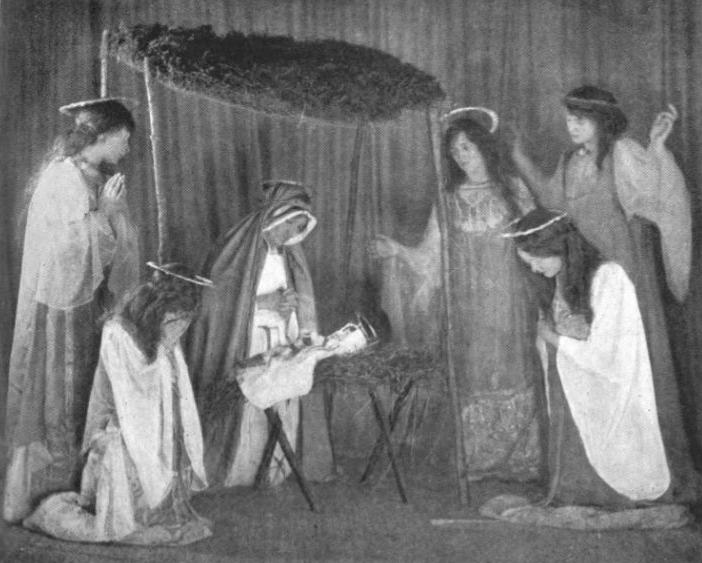 Tableaux featuring Greek aesthetics were also popular, because the draped costumes and classical poses were considered to be the epitome of grace and beauty.

If you’ve ever seen The Music Man you’ll remember that the mayor’s wife was devoted to performing Greek tableaux.

Even the famous Mrs. Astor, leader of New York Society, staged an evening of tableaux for charity in 1909.

National organizations also dove into the tableau craze. To publicize their organization, the Red Cross staged tableaux on the south front of the Treasury Building in Washington DC in 1917: 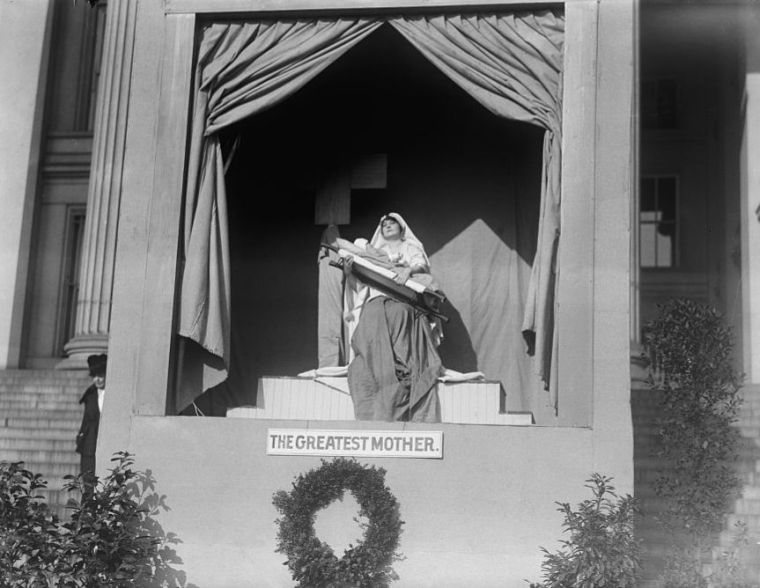 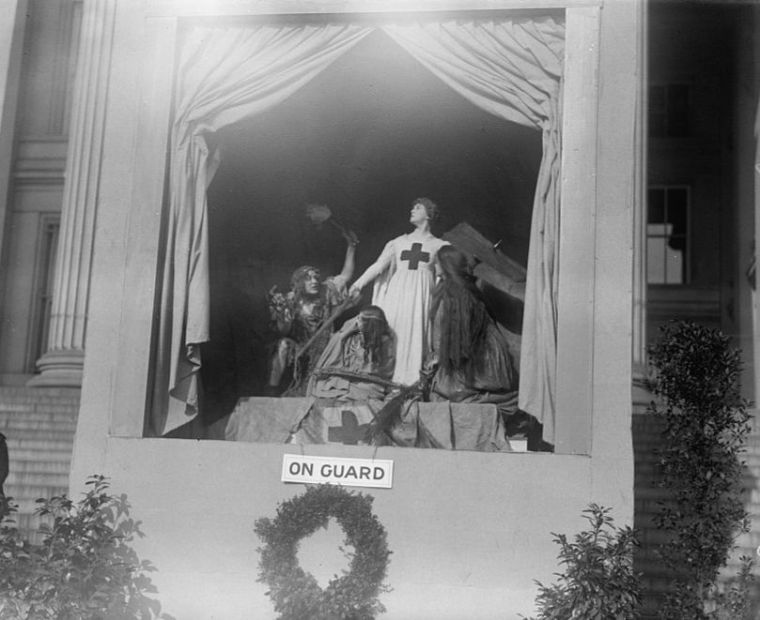 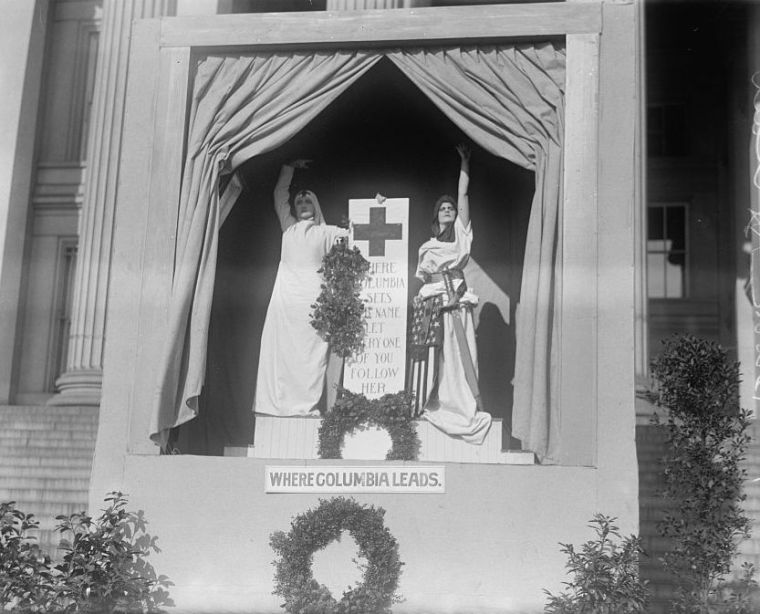 It’s possible that Isabella participated in a few tableaux herself. She was certainly able to describe the entertainment with some affection and a good deal of detail in several of her books and stories.

Did you know there are still organizations practicing the art of tableaux vivant today? One such organization is the New Orleans Tableaux Vivant Society. Click here to visit their site, where you’ll find news of upcoming performances and photos of past events.

If you know of any other tableau events coming up, please share by posting a comment below.

The idea for this post was suggested by Karen, a regular reader of this blog. If you have any questions about Isabella Alden or would like to learn more about something you read in one of her books, please leave a comment below.