In her books about the Chautauqua Institution, Isabella Alden often described her characters walking with—or against—great crowds of people going from one lecture or class to another.

A visitor to Chautauqua could stay busy from breakfast to bed-time if he or she took advantage of the many learning opportunities offered throughout the day. 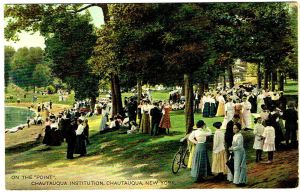 Visitors could join friends in the park, take a swim in the lake, rent a canoe or sailboat, or explore the paths and walkways on their own.

For those who wanted a little more structure to their leisure time, Chautauqua offered organized activities, as well. The Men’s Club opened its doors in 1892. The Women’s Club opened soon after, and the “club model” progressed, with new clubs formed for almost every possible interest.

There was a Golf club, an Athletic Club, a Croquet Club, a Sports Club, a Quoit Club, and Modern Language Clubs in French, German, and Spanish. The Music Club met in their own studio on College Hill. The Press Club was formed by men and women who wrote books and articles for magazines and newspapers.

There was a Lawyers’ Club, a Masonic Club, a College Fraternity Club, and Octogenarians’ Club, which only admitted members aged eighty years and older.

The Bird and Tree Club helped catalog the flora, fauna and bird life of Chautauqua and the surrounding area.

A branch of The King’s Daughters and Sons met regularly at Chautauqua, and in 1972 the organization moved its headquarters to the Chautauqua Institution. This organization was founded on the principal of Christian service to others. You can learn more about The International Order of The King’s Daughters and Sons by visiting their website at www.iokds.org. 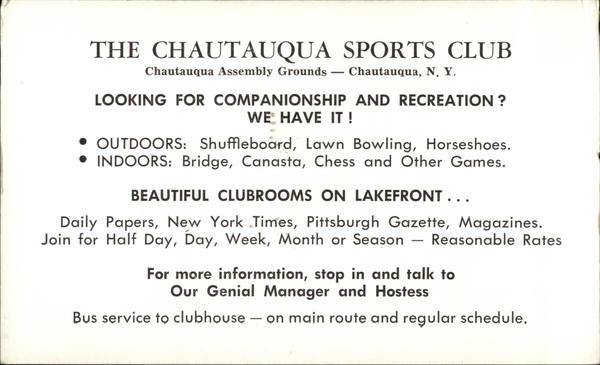 Young people also found plenty of fun things to do at Chautauqua. For the little ones there was a kindergarten at Kellogg Hall, which included a playground and sandbox. The Children’s Paradise was a completely equipped playground on the north end of the grounds.

Older girls aged eight to fifteen had their own club geared specifically to interests of girls who were not quite young women. Members of the Chautauqua Boys’ Club wore distinctive blue sweaters bearing the club’s C.B.C. monogram.

There were many more clubs and organizations that found a home at Chautauqua, but two activities never made an appearance: Card playing and social dancing were taboo—not because they were condemned activities, but because they were “unsuitable to Chautauqua conditions and even hostile to its life.” Chautauqua was an interdenominational assembly; so it was natural that some attendees found no fault with card playing or dancing, while others believed they were incompatible with Christian life. The Chautauqua founders decided that allowing either activity would simply be distracting and divisive, so they maintained a tradition that neither pursuit had a place at Chautauqua.

Next stop on our Tour of Chautauqua: Lessons and Classes