In the early days of Chautauqua, there were no hotels or boarding houses where visitors could stay. Instead, visitors rented tents or small cottages erected on the grounds. Some cottagers with room to spare rented out rooms to paying guests, but Chautauqua rules prohibited anyone from providing meals for pay.

If you were not lucky enough to have a kitchen of your own in which to prepare your meals, you had to eat in the dining-hall, which was a long, open-air building furnished with rough, unpainted tables and benches.

Visitors often complained that the roof leaked and the backless benches were uncomfortable, but the dining hall was the only place visitors could have meals unless they prepared food themselves.

In Four Girls at Chautauqua, Isabella Alden used the no-board-for-profit rule to show the difference in personalities between practical Marion and wealthy Ruth as they ate in the dining hall:

It was a merry dinner, after all, eaten with steel forks and without napkins, and with plated spoons—if you were so fortunate as to secure one. The rush of people was very great, and, with their inconvenient accommodations, the process of serving was slow.

Marion, her eyes being opened, went to studying the people about her. She found that courteous good-humor was the rule, and selfishness and ungraciousness the exception. Inconveniences were put up with and merrily laughed over by people who, from their dress and manners, could be accustomed to only the best.

Ruth did not recover her equanimity. She was rasped on every side. Those two-tined steel forks were a positive sting to her. She shuddered as the steel touched her lips. She had no spoon at all, and she looked on in utter disgust while Eurie merrily stirred her tea with her fork. When the waiter came at last, with hearty apologies for keeping them waiting for their spoons, and the old gentleman said cordially, “All in good time. We shall not starve even if we get no spoons,” she curled her lip disdainfully, and murmured that she had always been accustomed to the conveniences of life, and found it somewhat difficult to do without them.

In 1876, the meal restriction was removed and anyone could provide rooms and meals for a fee, as long as a specified percentage of the amount charged was given to the Institution. Within a year, boarding houses had sprung up as if by magic, while a vast number of individual cottages sported signs offering “Rooms and Board.”

In Four Mothers at Chautauqua, Mrs. Bradford and her daughters rented a cottage for the summer, despite the fact they could ill afford it. Mrs. Bradford was always on the look-out for ways to economize and found one way to make her pennies go further at Chautauqua:

Before Mrs. Bradford’s table economies reached what Josephine called the “starvation point” a method of relief was discovered. It was learned that among the numerous boarding houses scattered over the grounds, certain of them furnished fairly good meals for twenty-five cents. They were named lunches, to be sure, but on occasion they would serve excellently well for dinners. Pencil and paper together with a vigorous exercise of Josephine’s computation powers proved that seventy-five cents would afford three of them better dinners than that sum would produce in the kitchenette.

The Longfellow Cottage was a large boarding house. Centrally located on Roberts Avenue, it was only one block away from The Amphitheatre, the C.L.S.C. Building, the Children’s Temple,the Administration Building, The Colonnade and the Post Office (which will be featured in the next leg of our tour).

The Palace Hotel was the first hotel on the Chautauqua grounds, but it was far from luxurious. It was little more than a three-story, wood-framed tent, with canvas partitions to divide the guest “rooms.”

In 1881 the Palace Hotel was replaced by The Athenaeum, a proper hotel that featured elegant accommodations and beautiful views of the lake.

As the Athenaeum attracted more guests, the cottages and boarding houses grew in number, size and comfort in order to compete for their share of paying boarders.

When the Four Mothers returned to Chautauqua with their children and grandchildren, they stayed at a hotel that sounded very much like The Athenaeum. Isabella Alden set many scenes on the hotel’s upper and lower verandas and her characters made great use of the lush lawns that led from the hotel down to the lake.

This image of The Hotel Athenaeum and its verandas is dated 1911, just two years before Four Mothers at Chautauqua was published.

Visitors to Chautauqua used a Handbook of Information to locate places to stay. These sample pages from the 1908 Handbook list hotels and boarding houses on the grounds, their addresses, and the owners of the establishments. The Longfellow boarding house (pictured earlier in this post) is listed on the top of the second page. 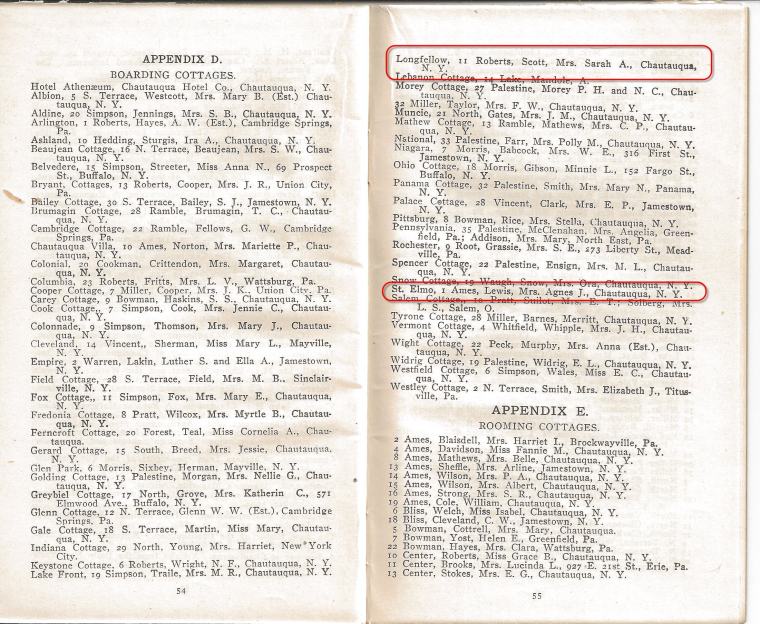 The St. Elmo was another hotel on the Chautauqua Institution grounds that was listed in the 1908 Handbook. Here’s how The St. Elmo looked in 1920, as it stood at the corner of Ames and Pratt Avenues.

With all the boarding and hotel options, tent living still thrived. Chautauqua’s founders, John Heyl Vincent and Lewis Miller, maintained residences that were hybrids of cottage and tent.

As Chautauqua grew and offered more and more styles of accommodations, many visitors still chose a simple summer of tent life in God’s great outdoors.

Next  on our Tour of Chautauqua:  Touring the Grounds

2 thoughts on “A Tour of Chautauqua – Where to Stay”