That was the year Grace’s novel The Search was published as a serial in a popular Christian magazine. The first chapter appeared in the January 1, 1919 issue.

Here’s the announcement the magazine ran the month before to notify readers about the upcoming serial (click on the image to see a larger version). 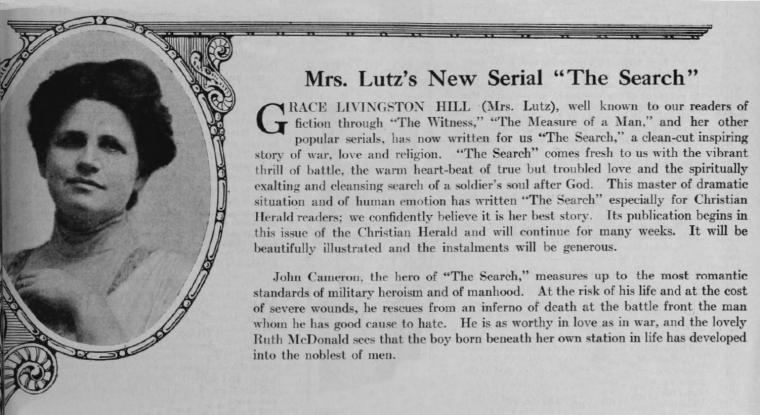 Although it’s fun to discover Grace’s stories in early newspapers and magazines, it’s even better when they’re accompanied by illustrations by the leading artists of the day.

Artist William Charles McNulty (whose pieces are included in collections at The Metropolitan Museum of Art) illustrated three scenes from The Search for the magazine.

McNulty’s illustrations add a rich sense of time and place to the story, from the old-fashioned automobile Ruth drove, to the characters’ clothing, and the quiet place John found (in chapter 4) to read Ruth’s letter.

Later that same year, The Search was published in book form by Lippincott, and was well received by Grace’s fans; but the magazine version remains special, because of its illustrations.

If you haven’t read The Search, you’re in luck! You can read the e-book for free on your tablet, phone, Kindle or computer!

Amazon.com offers the e-book book at no charge. Just click on the banner below to begin reading:

6 thoughts on “The Search by Grace Livingston Hill”