“Nurse” was a word that figured often in Isabella Alden’s novels, but not all her nurses were created equal.

In some of her stories, “nurse” was another term for a nanny—a woman who took care of young children.

That was the case for Miss Rebecca Meredith in Wanted, who hired herself out as a “nurse-girl” after she applied for the job listed in this newspaper ad:

Wanted—A young woman who has had experience with children, to take the entire care of a child three years of age. Call between the hours of four and six, at No. 1200 Carroll Avenue.” 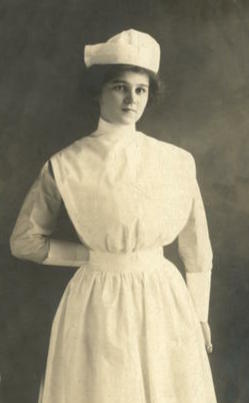 In other novels, like The Older Brother, nurses were everyday people who knew what to do whenever illness struck, like Aunt Sarah:

Aunt Sarah proved herself a veritable angel of mercy. She was able to lay aside her brusqueness and her sarcasms, and become the skillful practical nurse, taking her turn and indeed more than her turn with the others, and compelling the anxious mother to take such rest as she needed.

Aunt Sarah and Rebecca Meredith developed their nursing skills through practical experience, and a history of caring for neighbors and family members who were ill.

But when Helen Betson’s father fell ill in Echoing and Re-echoing, the doctor insisted on securing the services of a “professional nurse,” which threw Helen into days of anxious waiting:

If she could have done a share of the nursing—but they had been forced to employ a professional nurse who shared the task with her mother, so that it was only now and then a little service that Helen was permitted to do; and she grew weary of the long waiting that seemed so purposeless. 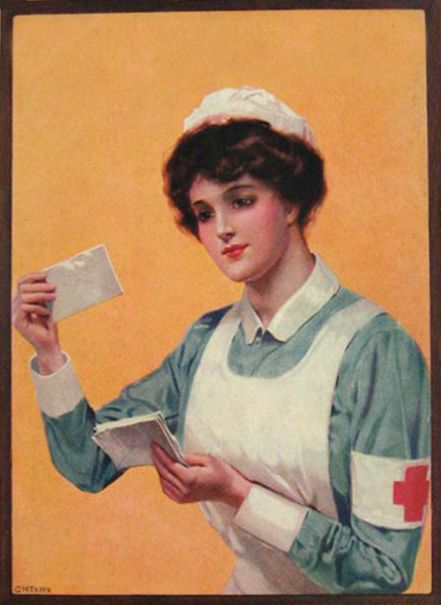 In Isabella’s lifetime, it was common for physicians to train their own nurses, but they often found it difficult to find candidates who already possessed basic knowledge of human anatomy, nursing science, and mixing medicines.

The best candidates were trained in a hospital setting, but hospital training programs had drawbracks:

Most programs had age limits that disqualified women who were middle-aged and older.

The coursework took years, and tuition was expensive at a time when there was no such thing as tuition assistance or student financial aid.

The programs tended to attract only local students because the best teaching hospitals were in large American cities where the high cost of living proved a barrier to outsiders.

Fees charged by graduates of hospital programs meant their services were unaffordable for the majority of Americans, especially those in rural areas of the country, so nursing school graduates tended to live and practice in larger cities.

The result: America had a great shortage of competent, trained registered nurses. Dr. Everett mentioned the problem in Isabella’s novel, Workers Together:

Professional nurses are good when you can get them. It is unfortunate that they are especially scarce just now. I have been on the look-out for one all the morning without success.

A New Yorker named Cyrus Jones decided to do something about it. Because he lived very close to Chautauqua Institution, he was familiar with the Chautauqua Literary and Scientific Circle. The CLSC conducted first-class four-year college degree courses via correspondence. He was certain nurses could be trained using the same methods. He said:

There must be many thousands of bright, earnest women, young and old, who would be nurses if they could learn the profession without going to a hospital. Other branches of knowledge are taught by mail and learned at home. . . . Why not nursing?

Mr. Jones launched the Chautauqua School of Nursing in 1900, and it was immediately successful. Over 200 students enrolled the first year.

Unlike other schools, Chautauqua School of Nursing did not have age limits, welcoming many women who were denied admission to other schools because of their age.

Since the enrollment fee was only $75.00, women who intended to work as professional nurses knew they would soon earn back that cost because they would earn between $10.00 and $35.00 a week as a registered nurse after graduation.

But the highest enrollment came from students who lived in rural and isolated areas where conventional hospital training schools didn’t exist.

Like the hospital-based schools, the Chautauqua School of Nursing bestowed upon its graduates its own pins, caps, and certificates.

In every respect, its graduates appeared to have the same training and cachet as graduates of hospital programs. The public couldn’t tell the difference.

They also employed a very unique marketing tactic: They advertised their students.

The school used their real students as models in their print ads in magazines and newspapers.

And if a prospective student was unsure whether or not she should enroll in the course, she had only to write the school.

In return, the school would provide the prospective student with the name and address of the graduates closest to her, with an invitation to contact any one of them to get more information about the school, the teaching curriculum, and what graduates’ lives were like as professional nurses.

In all respects, the school was a success. Because of the Chautauqua School of Nursing, hundreds of communities had a trained, reliable nurse for the first time . . .

. . . and thousands of women entered into a respected profession that helped their communities, and produced a steady income for themselves.