Facing Miller Park at the intersection of Pratt and Morris avenues, The Colonnade was the business center of Chautauqua Institution.

Visitors approaching The Colonnade from the south passed through a lovely, vine-covered pergola.

The Colonnade was a busy place. Nearby was the post office, where residents retrieved and sent mail.

The Colonnade itself was a favorite place for friends to gather. It housed a grocery, a dry-goods store, a hair salon, a barber shop, a drug store, and various other merchants.

One retailer that managed to secure a prime location in The Colonnade was an establishment called Spirella Parlour, which was a genteel store name for the Spirella Corset Company.

The Spirella Corset Company had factories established in Pennsylvania and Canada when they set up shop in The Colonnade at Chautauqua. Wedged between a ladies’ dress shop on one side and the main hall, their’s was an ideal location. The store was staffed by “skillful corsetières” (more on them in a moment).

In Isabella’s time, every woman—and many girls—wore corsets. They were an essential element of a lady’s undergarments.

But corsets did not last very long. Their stays had a tendency to break; and since corsets were worn over only a thin muslin chemise or slip, perspiration and natural skin oils often stained the corset fabric or rusted the stays.

Corset garter hooks often broke, and their long lacing ribbons often snapped off. For women, access to a store such as Spirella’s on Chautauqua’s premises was practically essential, since the nearest town where a lingerie store might be found was miles away.

Once a lady had donned her chemise or slip (sometimes called a shift), she put on her corset. Then she added other layers of undergarments:

Over all of that she donned her dress or skirt with shirtwaist.

This 1908 newspaper ad in the Omaha Daily Bee shows some of the many different undergarments women wore under their clothes.

A woman’s corset was essential; she wore a corset wherever she went, no matter what she was doing. 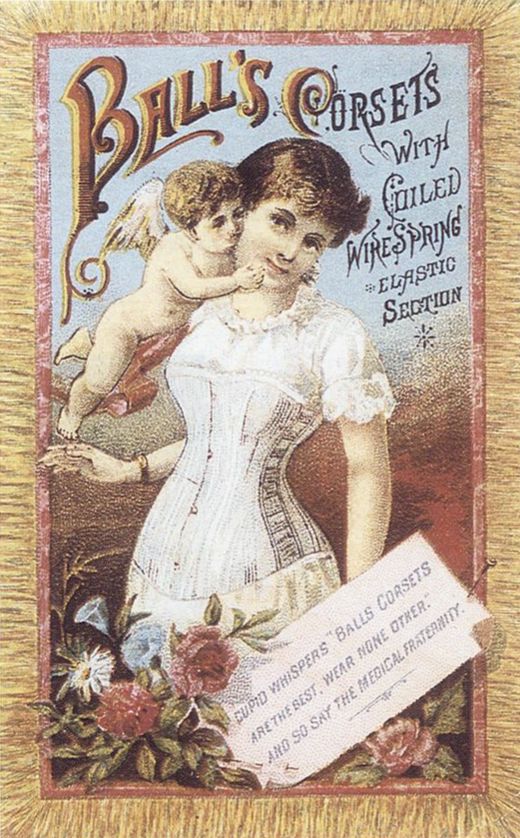 Of course, The Spirella Company was not the only corset manufacturer in the United States. There were many such companies, each vying for their share of the corset market.

What set Spirella apart from their competition was that they specialized in custom-made corsets.

In fact, the Spirella Parlour at Chautauqua is the only known retail location for Spirella Corsets in America. Instead of opening stores, The Spirella Company hired a legion of women called corsetières who were sent to customers’ homes. The corsetières took the customer’s measurements and consulted on the correct model of Spirella corset based on the lady’s figure type.

According to Spirella’s 1913 customer brochure:

“The secret of being well dressed lies in your figure, and your figure is made or ruined by your corset.”

You can see The Spirella Corset Company’s 1913 brochure distributed by their corsetières to customers. The booklet is filled with nice illustrations of the different models of corsets they offered, and offers guidance on how to select the proper corset based on body type. Just click here.

You can also watch this fun video that shows the many layers of undergarments women wore in the late 1800s and early 1900s:

. . .  as essential as a corset was to every woman’s wardrobe, Isabella never mentioned corsets in any of her many books and stories. She did mention shifts and petticoats, but never made mention of corsets.

7 thoughts on “Corsets at Chautauqua”