If you’ve read any of Isabella’s books, chances are you’ve noticed that her Christian characters refused to travel on Sundays.

While others in the story may have planned a carriage ride to a pleasure garden, or a train ride to the next town to hear a famous minister preach, good Christians in Isabella’s stories didn’t go anywhere on Sunday unless they could get there on foot.

That was true of Ruth Burnham in Judge Burnham’s Daughters. Here’s an exchange between Ruth and her young son:

“Mamma, what makes it wicked to ride in the steam cars on Sunday?”

“My darling, don’t you remember mamma told you how the poor men who have to make the cars go cannot have any Sunday—any time to go to church, and read the Bible, and learn about God and heaven?”

“I know, mamma; but the cars go all the same, and the men have to work, and so why can’t we ride on them? They wouldn’t have to work any harder because we went along.”

Ruth’s son voiced an argument that wasn’t new. Isabella had heard it herself many times; but she believed in the sanctity of the day of rest, and she followed her church’s direction on the proper way to observe Sundays.

When Isabella was growing up in New York, it was much easier to observe the Sabbath because there were laws on the books that enforced Sabbath rules and eliminated personal choice:

There were similar laws in most other states. Having been raised in such an environment, Isabella’s strict observance of the Sabbath rules became second-nature to her.

In the early days of street-cars, many cities barred cars from operating on Sundays. Here’s a record of a driver who was arrested in 1859 for violating the law: 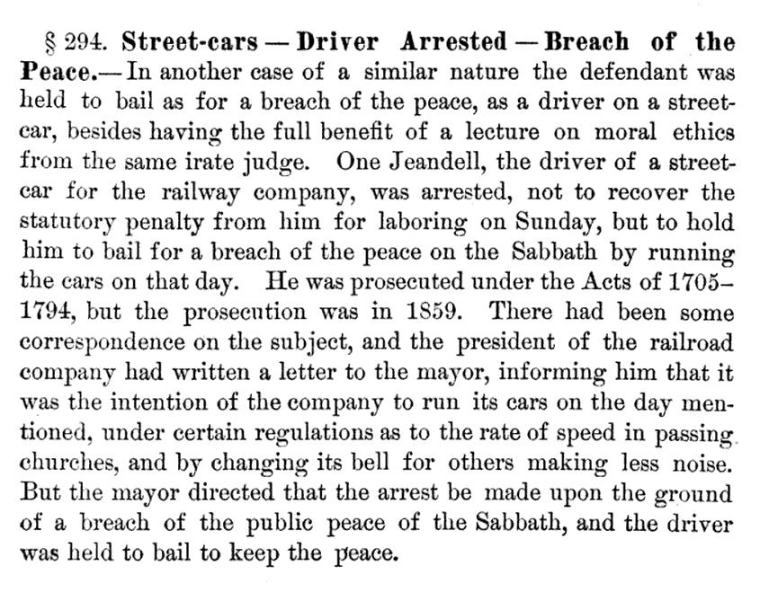 It wasn’t just street-cars that fell afoul of the fourth commandment. When the Postmaster General of the United States proposed delivering mail on Sunday to aid in its efficient flow, conservative Christians took swift action, circulating a petition to stop the plan:

But by the end of the 19th century, the average American’s perception of Sunday had shifted. No more was Sunday a traditional day of rest; it had morphed into a day of liberty. After a long, six-day work week, people wanted to do something or go somewhere, and trains and street-cars made it possible.

With street-cars, pleasure gardens and museums were only a short ride away. And a day at the sea shore was possible, thanks to an intricate network of train tracks and passenger cars that whisked people away from the hot, humid city twice a day on Sunday, and returned them safe and sound to the city in the early evening.

Cities and states soon saw the commercial benefits of allowing restaurants, theaters and other businesses to open on Sundays; and they began to quietly repeal the old Sabbath laws.

Like many Christians, Isabella viewed the changes with concern. After all, America was a country founded on Christian principles. But as more and more Sabbath observances fell by the wayside, many Christians saw the change as a symptom of a bigger issue: Christianity was losing its grip as the leading religion of the country.

But Christians didn’t take the changes lying down. They organized and petitioned, wrote their congressmen, and fought for new laws and ordinances to protect the Sabbath, to no avail.

The newspapers and magazines caught wind of their efforts and labeled them Sabbatarian Fanatics.

When Christians protested plans to open the 1901 Pan American Exposition in Buffalo, New York on a Sunday, Puck magazine spoofed their efforts with this cover illustration:

Isabella knew all about the “fanatic” label. She probably had heard it used in regard to herself; and since she often used her own life experiences in her books, she wrote about it in Judge Burnham’s Daughters. When Ruth refused to entertain unexpected callers on a Sunday, the town gossips said:

What a pity it was that so fine a woman as Mrs. Burnham should be so completely under the control of fanatical ideas!

Even Ruth’s husband applied the word to her:

I do not quite understand how you came to be such a slave to fanaticism, Ruth; it does not seem like you. Your father had a touch of it, to be sure, but I think he must have caught it from you, since you go so far beyond him.

But Isabella—like Ruth—held fast to her fundamental belief that the Sabbath should remain holy. Despite the name-calling and the opposition around her, she held to her belief that the Lord’s Day should be spent in Divine activities that celebrated her relationship with God. And that was something Isabella knew she couldn’t accomplish on a street-car.

In the early 1900s Reverend R. A. Torrey compiled the works of different conservative writers into an article titled, “Why Save the Lord’s Day?” You can click here to read the complete article.

Many thanks to Marie Peters who inspired this post! If you have a question about Isabella or a related topic you’d like to see explored on this blog, leave a comment here or on Facebook!

One thought on “Sunday on the Street Cars”