On this day in 1933 Prohibition ended in the United States. It had begun thirteen years earlier with passage of the 18th Amendment to the United States Constitution; that Amendment prohibited the manufacture, sale and transportation of intoxicating liquors.

Isabella Alden was a staunch supporter of Prohibition, and her best friend, Theodosia Foster, dedicated her writings to the temperance movement by ensuring there was a strong anti-alcohol message in every story and novel she published.

Like Isabella and Theodosia, supporters of Prohibition believed that Prohibition was a “Noble Experiment” that would improve the nation’s moral and physical health, and curb the growing incidents of violence against women and children. 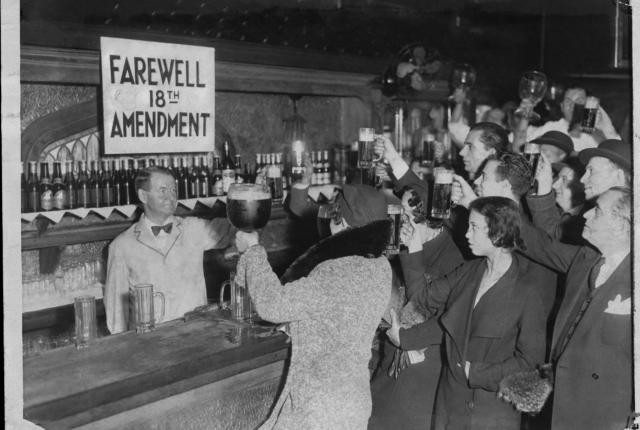 In many ways, the 18th Amendment achieved those goals, but there were some unintended consequences, too.

It overwhelmed police with enforcement duties and gave rise to organized crime.

The number of deaths from poisoning skyrocketed, as Americans resorted to improperly brewing their own alcohol or resorted to drinking industrial alcohol, with deadly consequences.

Perhaps most significant were the financial consequences. In cities like Milwaukee, Seattle, and St. Louis, thousands of people found themselves out of work when the breweries shut down. And many states, as well as the Federal government, became cash strapped when they could no longer collect liquor taxes. New York was especially hit hard; almost 75% of that state’s revenue was derived from liquor sales.

In the end, the “Noble Experiment” failed. The few benefits achieved by prohibition weren’t enough to offset the proliferation of organized crime and the hard financial consequences for average Americans. The 18th Amendment was repealed by passage of the 21st Amendment on December 5, 1933.

There’s a great website you can visit to learn more about life in America during Prohibition. Click here.

One thought on “Good-bye, Prohibition!”