Isabella Alden was very close to her sister Marcia, who married the Reverend Charles Livingston. For many years Isabella’s and Marcia’s families lived together under the same roof.

In the summer months the Aldens and the Livingstons traveled to Chautauqua, New York and shared a cottage on the grounds of the Chautauqua Institution.

In the winter they made the pilgrimage to Florida, where the two families lived in a large house in Winter Park.

Before Grace took up her pen to write some of America’s most beloved novels under the name Grace Livingston Hill, she was one of the first teachers at Rollins College. She was also a true advocate for the “physical culture” movement that was sweeping the country at the time. She recognized the freedom it gave women to pursue physical health in a way they hadn’t been able to before. At Rollins she taught ladies’ classes in calisthenics, basketball, gymnastics, and fencing.

She also taught men’s classes in physical culture, such as fencing and Greek Posture:

And when she wasn’t teaching at the college, she taught physical culture classes at the Florida Chautauqua.

Like her niece, Isabella appreciated the physical culture movement. She even featured the craze in one of her short stories, “Agatha’s Uknown Way.” 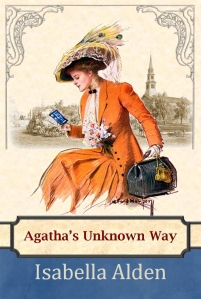 Would you like to learn more about Grace Livingston’s teaching years at Rollins College? Click this link to read a fun story about one of her biggest challenges at the school, and how she convinced the faculty to see things her way.

You can also read a previous post about the birth of gymnastics at Chatuauqua Institution.

Enjoy Isabella’s story, “Too Much of a Good Thing”:

Too Much of a Good Thing

Downstairs everyone was busy. Uncle Morris and his entire family, just from Europe, were coming by an earlier train than it had been expected they could take, and many last preparations for making them comfortable had still to be attended to.

Mrs. Evans had been up since daylight, planning, directing, and helping to the utmost that her small strength would admit.

Indeed, her eldest daughter Laura had constantly to watch, to save her mother from lifting something heavy, or reaching for something high. Often her clear voice could be heard with a “Oh, mother, don’t! Please—I’ll take care of that.” And often the gentle answer was:

“Dear child, you cannot do everything, though your will is strong enough. Where is Millie?”

“Millie has gone to sweep and dust the hall room; you know we didn’t think we should need that, and I used it as a sort of store room; but since Arthur is coming with them, we shall have to get it ready; and he will need to go at once to his room, since he is an invalid, so I sent Millie to put it in order. I told her just what to do, and she will manage it nicely. She must be nearly through now, and I’ll have her finish dusting here, so I can help you with those books; they are too heavy for you to handle.”

No, Millie wasn’t nearly through. In fact, she could hardly have been said to have commenced. The truth is, she had been thrown off the track. It was an old print which fell out of an, unused portfolio that did it. The print showed the picture of a girl in fun Greek costume, and reminded Millie of what was not long out of her mind, that in the coming Physical Culture entertainment she was to chess in a costume which was supposed to be after the Greek order.

“Let me see,” she said, bending over the print, “this girl has short sleeves and low neck. Why, the dress is almost precisely like the one which Laura wears with her lace over-dress; I might wear that. It would be too long, of course, but it could be hemmed up. I am almost sure Laura would let me have it; and with her white sash ribbon tied around my waist it would be just lovely. Then that would save buying anything new, and save mother any trouble. I mean to go this minute and try on the dress, before I say anything about it.”

Away dashed the Greek maiden to one of the guest chambers which Laura had left in perfect order, dragged from a seldom used drawer the elegant white mull dress with its lace belongings, all of which saw the light only on state occasions, and rushed back to the hall room again, where she had left the print she was trying to copy. In her haste, she dragged out with the dress various articles of the toilet. Laura’s white kid gloves which she wore when she graduated, a quantity of laces, and a handkerchief or two, to say nothing of sprays of dried flowers. These she trailed over the carpet, seeing nothing of them. The important thing in life just now was to get herself into that dress.

It was accomplished at last, not without a tiny tear having been made in the delicate stuff, but which Millie’s fingers were too eager to notice. She tied the white sash high up about her waist, after the fashion of the picture, seized the dust brush in one hand as if it were a dumb bell, or an Indian club, and struck a graceful attitude with her arm on the corner of the mantel.

“There!” she said, “I would like to have my picture taken in this dress; I have a very nice position now for it. I wish the girls were here to see me. Laura must let me wear this; it fits exactly. I don’t believe it is much too long for a Greek maiden. I should like to wear my dresses long; it must be great fun. I wonder if we couldn’t have our pictures taken in costume? I think it would be real nice; and our folks would each want to buy one. Perhaps we could make some money.”

There were hurried steps in the hall, and the Greek maiden’s musings were cut short. Laura came forward rapidly, talking as she
came.

“Millie, aren’t you through here? You have had plenty of time, and mother needs your help right away. Hurry down just as quickly as you can; she is over-doing, and it is growing late; the carriage may come any minute now. Why, Millie Evans!”

She stopped in amazement, for the Greek maiden was still posing. She smiled graciously and said: “Don’t I look fine? I borrowed it a minute to see if it will do to wear to the entertainment. It is just the thing, isn’t it? You will lend it to me, won’t you? Just for one evening? I’ll be awfully careful of it.”

“And you have been to that drawer where all the nice things are packed, and dragged them out! There is one of my white gloves under your feet, and my only lace handkerchief keeping it company! I must say, Millie Evans, you deserve to be punished. Here we are trying our best to get ready for company, and keep mother from getting too tired, and you neglect your work to rig up like a circus girl; and go to a drawer which you have no right to open. I shall certainly tell father of this.”

The Greek maiden’s cheeks were in an unbecoming blaze. Laura was hurried and tired, and spoke with more severity than was her custom. It certainly was trying to find the room in disorder, and her best dress in danger.

“Take care,” she said, as Millie’s frantic efforts to get it off put it in greater danger. “Don’t quite ruin that dress. Indeed you shall not wear it. I am astonished at you for thinking of such a thing; when father hears what you have been doing, I doubt if you will need a dress for the entertainment.”

Then Millie lost all self control. “You are a hateful, selfish thing!” she burst forth. “Take your old dress; I don’t want to wear it; and I won’t be ordered about by you as though you were my grandmother. I’m nearly fourteen, and you have no right to manage me. I’ll just tell father myself that I—”

“What is all this?” Mr. Evans’ voice was sternness itself, and he looked at the girl with blazing cheeks, in a way that made her angry eyes droop.

“What does it mean, Millicent? I heard you using very unbecoming language to your sister, and to judge from your appearance you have been about some very inappropriate work.”

“Never mind what Laura did, Millicent. Unfortunately for you, I know which daughter tries to care for and spare her sick mother in every possible way. I overheard enough to show me which one is to blame. Laura may tell me what is the trouble, and you may listen.”

But Laura was already sorry that she had spoken so sharply, and tried to soften the story as much as truth would permit.

“Her mind is so full of the Physical Culture entertainment, father, that she does not stop to think. I know she did not mean to hinder and make trouble.”

“I see,” said Mr. Evans, speaking grimly. “I have heard a good deal about this Physical Culture business. If everyone is as much carried out of common sense by it as our Millicent is, I should say it was high time to have some moral culture. Millicent, you may put yourself into a suitable dress for sweeping, and do the work you were sent to do, at once; and you will not need to think any more about a dress for the entertainment, for you are to be excused from attending it. You may tell your teacher that I said so.”

Poor Millie! The hall bedroom floor might almost have been washed, if that were desirable, with the tears she shed. No hope had she of any change of mind on her father’s part. He rarely interfered with his children, but when he did, his word was law.

And poor Laura! She went downstairs heavy-hearted and miserable. Why had Millie been so silly, and why had she allowed her vexation to make matters worse?

The poor frail mother actually cried when she heard of Millie’s disappointment. “Yet I really cannot ask her father not to notice it,” she said sorrowfully. “Millie has been so remiss in her duties for weeks, all on account of the hold which that Physical Culture craze has upon her. It is too much of a good thing. I am afraid her father is doing right.”