For over twenty years Isabella Alden and her husband edited a children’s magazine called The Pansy. 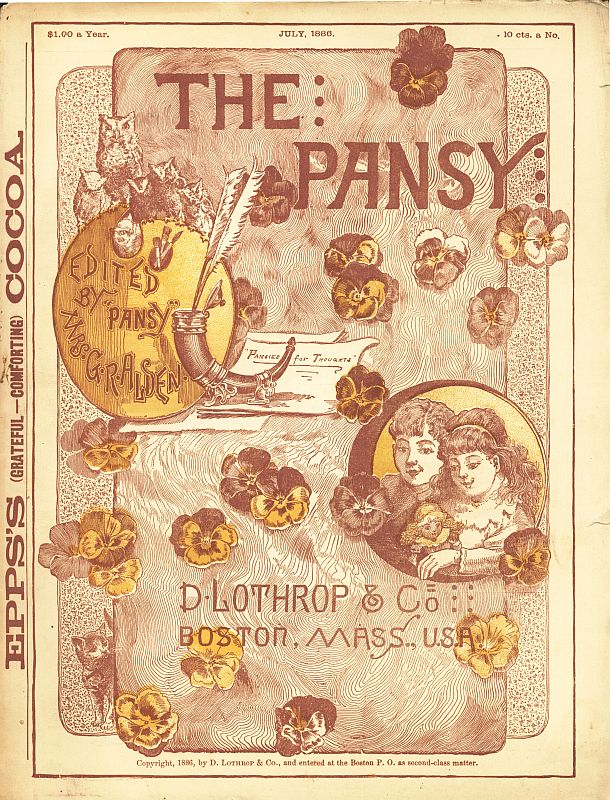 Each issue was filled with inspiring stories, delightful illustrations, short poems, and descriptions of exotic and far-away places to spark children’s imaginations. Published by D. Lothrop and Company of Boston, the magazine was first produced as a weekly publication, and later changed to a monthly.

Editing and writing for the magazine was no easy undertaking and Isabella’s entire family pitched in to help.

Pick up any issue of The Pansy and you’ll find stories by Isabella’s sisters, Julia Macdonald and Marcia Livingston, or her best friend, Theodosia Foster (writing as Faye Huntington).

Margaret Sidney, famous for the Five Little Peppers books for children, published some of her books as serials in The Pansy, as did author Ruth Ogden. Even Isabella’s brother-in-law Charles and beloved niece Grace Livingston (before her marriage to Reverend Frank Hill) contributed stories.

Isabella’s son Raymond wrote poems, and her husband Reverend Gustavus “Ross” Alden contributed stories and short homilies like this one:

Sometimes, the family banded together to write stories for the magazine. In 1886 each family member—Isabella, Ross, Marcia, Grace, Raymond, Theodosia, and Charles—took a turn writing a chapter of a serial story titled  “A Sevenfold Trouble.” In 1887 they continued their collaboration by writing a sequel titled, “Up Garret,” with each writer again  producing a different chapter. In 1889 the combined stories were published as a book titled A Sevenfold Trouble.

Isabella also previewed some of her own books by publishing them as serial stories in the magazine. Monteagle and A Dozen of Them first captured readers’ hearts in the pages of The Pansy.

The magazine was a resounding success. Thousands of boys and girls from around the world subscribed. Many children grew to adulthood reading the magazine, as Isabella remained at the helm of The Pansy for over 23 years.

Next week: The Pansy Society

8 thoughts on “The Pansy Magazine”