In 1911 a resurgence of spiritual awakening was sweeping across the United States. Even in the mid-west states—where “that old time religion” was firmly entrenched—people were undergoing a revival of spirit and rededication to the Christian life.

When Isabella Alden wrote Lost on the Trail in 1911, the concept of tent revival meetings wasn’t new. Only four years earlier a great Christian revival had spread across the U.S. and Canada, led by two Australian ministers who traveled the Americas converting thousands of souls.

And in 1897, when America suffered a tremendous economic crash, people turned to revival meetings for hope and comfort in a very tough time.

But by the early 1900s the Christian revival meeting had reached new levels, thanks, in many ways, to the emergence of great revival preachers and the power of the American newspaper.

Many popular ministers traveled the country and drew large crowds, but Billy Sunday was the rock star of the revival circuit.

When Billy Sunday preached, forty to fifty thousand people went to hear him each day. He spoke in tents, open fields, and huge tabernacle structures built especially for him in Michigan, Indiana, Ohio, and New York. Newspapers reported that wherever he went, the crowds were so great police could not control them.

In Pittsburgh, the newspaper reported 3,000 club women paraded down the main street of town to a Billy Sunday revival meeting. In Chicago, the entire office force of the courthouse abandoned their desks to march to the meeting tent, accompanied by a brass band.

In the 1880s Billy Sunday was a baseball player. He played outfield, first for the Chicago White Sox and then the Pittsburgh Alleghenies (later, the Pittsburgh Pirates). He was a good player; he had a .291 battering average and he set a record for stolen bases. But his real calling, he believed, was giving regular locker-room sermons to his teammates about the evils of alcohol and tobacco. 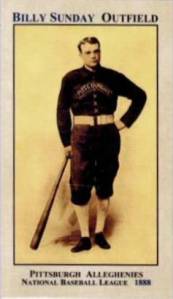 After he left baseball, Billy Sunday was ordained by the Presbyterian Church, and embarked on a career as an evangelical minister.

Not every revival meeting was led by a minister of Billy Sunday’s calibre. In small towns and large cities across the country, revival meetings of every size popped up during spring and summer months.

While Billy Sunday might spend up to six weeks in a single city and convert forty thousand people, most small revivals lasted one to two weeks with considerably fewer attendees—but the effect was the same: people found new faith and hope by becoming Christians, and established Christians renewed their walk with God.

The thing to do is attend. Let us attend these meetings and, as Mr. Chapman says, feel every time he speaks that he is addressing you individually. Then we will be able to measure ourselves by the standard he represents and see if we are found wanting. The meetings are for the rich and the poor, for the people who are and would become Christians.

And in 1915 the Chicago Day Book invited Billy Sunday to “preach” a revival sermon via a daily column of the newspaper for five consecutive days. The Day Book promoted Rev. Sunday’s guest column in front page headlines and full-page spreads:

Isabella Alden drew on her experience with tent revival meetings in her allegorical novel, Lost on the Trail. In the book, a young woman named Weewona was raised from an early age by people in an isolated mountain cabin.

But one day Weewona ventured down the mountain and stumbled upon a tent revival meeting where she heard the Christian message for the first time. Isabella used Weewona’s story to illustrate the ignorance and uncertainty we all suffer until we accept salvation through Christ.

After that first taste of God’s message, Weewona felt compelled to seek God. She headed down the mountain again, determined to learn more about the message of the revival meeting.

For the first time in her life she was entirely on her own and unschooled in the ways of the civilized world. Finally, a kindly milk man helped her find a home . . . and took her on her first wagon ride. After Mr. Best got her settled in his milk wagon, he tried to put her at ease by asking if she’d traveled far.

“Y-yes,” said Weewona, breathlessly, for they were in motion now, and she had never felt anything like it. Pete had told her much about horses and wagons, but it is one thing to be told about a horse, and quite another not only to see one for the first time, alive and moving, but actually to be seated on a board behind him!

“Don’t it make you afraid?” she gasped, holding on firmly with both hands.

The old man looked at her curiously; then threw back his head and laughed, an entirely fearless, reassuring laugh.

“Afraid of Old Gray!” he chuckled. “Well, now, if that ain’t a joke! I shall have to tell mother that, sure. Why, Old Gray is the gentlest, reliablest horse that ever put foot on the ground! He wouldn’t hurt a fly, even after it had bit him, if he could help it. I guess you ain’t used to horses, are you?”

She answered with a single word, but her voice made the old man look closely at her again, and speak soothingly: “You needn’t be a mite scared. There ain’t anything going to happen to you as long as Old Gray and Stephen Best have you in charge.”

Riding in the dairy wagon was the first of Weewona’s adventures, but as she learned more about God and what it meant to live a Christian life, she blossomed and found the courage, with God’s help, to make a place for herself in the world.

You can read Billy Sunday’s five-part revival sermon as it appeared in the Chicago Day Book in 1915. Click on the image to begin reading:

Find out more about Lost on the Trail by clicking on the book cover:

5 thoughts on “Revivals and Milk Carts”