In The Browns at Mount Hermon, Mrs. Roberts was overjoyed when her most fervent prayer was answered—her daughter, Ailene gave herself to the Lord. Mrs. Roberts wanted to celebrate the blessing in the best way she knew how: by preparing a special breakfast for everyone to enjoy.

“Oh, well, we won’t mind if we don’t have muffins for breakfast tomorrow morning. What does it matter what we have to eat? Yes, it does, it matters a great deal. We want the best breakfast tomorrow morning that was ever had in this house. I should like to feed everybody on roses! Though after all, I don’t suppose they would like them to eat half so well as they do muffins. Or Sally Lunn; I’ll have Sally Lunn tomorrow, whole sheets of it. Mr. Brown says nothing was ever better to eat than my Sally Lunn; and Ailene likes it better than anything else; I wonder I didn’t think of it the first thing. Oh, Mary Brown! I’m that happy tonight over the child, that it is a wonder I can think of anything to eat! I feel as though I could fly, without wings. Don’t you think she’s settled it! She belongs to the Lord!”

Sally Lunn was a type of cake that originated in England; and there are American versions of the Sally Lunn recipe in cook books dating back to early 1800s. By 1907, when The Browns at Mount Hermon was written, Sally Lunn had become a favorite pastry on American tables, too.

There were as many versions of Sally Lunn as there were cooks; but, in general, Sally Lunn was a rather dense cake, much like sponge cake, that could be baked in a variety of ways.

For breakfast, it was usually made up in loaves, then served toasted and spread with butter.

It was also baked in muffin tins and served as tea-cakes with honey, fruit jelly, or sweet sauce.

If you made several sheets of Sally Lunn, as Mrs. Roberts planned to do, and it happened to go stale because you didn’t eat it fast enough, never fear. A 1903 edition of The Epicure magazine recommended cutting stale Sally Lunn cake into small slices or shapes, soaking then in a thin custard, and frying them in clarified butter. Sprinkle the top with sugar, and “you had very good Beignets.”

Here’s a recipe from 1913 that may have been close to the recipe Mrs. Roberts followed for her Sally Lunn cake: 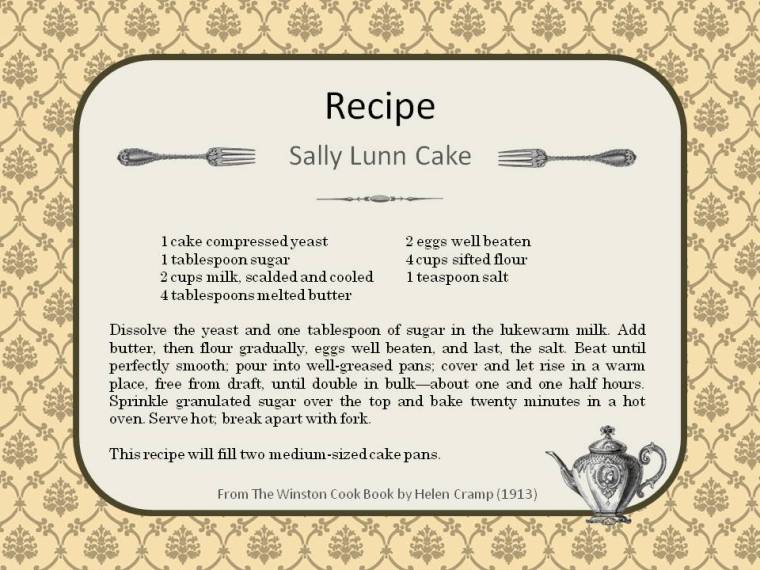 Click on the image to see a larger version you can print out.

Click on the book cover to find out more about The Browns at Mount Hermon.