When the merry party from the city completed their six weeks’ vacation and went home, they left a Christian Endeavor Society in the quiet seaside village fully organized and Henry Myers and Katrine Hempel are both on the lookout committee.

What, exactly, was a “lookout committee”?

As the name suggests, the Lookout Committee was responsible for bringing new members into a Christian Endeavor Society, but the committee members did so much more!

They were also responsible for educating potential members about their responsibilities. Joining a C.E. society was a major commitment, and it was the members of the Lookout Committee who ensured applicants understood everything membership entailed.

The most important requirement for a member was signing the C. E. covenant, which read:

Trusting in the Lord Jesus Christ for strength, I promise Him that I will strive to do whatever He would like to have me do; that I will pray and read the Bible every day; and that, just as far as I know how, I will try to lead a Christian life. I will be present at every meeting of the Society when I can, and will take some part in every meeting.

The Lookout Committee’s job wasn’t over once a new member joined. They called on members who missed even one prayer-meeting to encourage them to honor their commitment. They counseled members who were unfaithful to the covenant, and sometimes they had to make crucial decisions about when and how to drop members from their society.

At times, Lookout Committee members must have had a very difficult job!

But, as Rev. Clark summed it up, it was the Lookout Committee’s duty to keep the society active, earnest, efficient, and spiritually minded. A difficult task? Yes, but he regularly reminded Lookout Committee members that . . .

“You can do it through Him who strengtheneth you.”

Did you know Christian Endeavor Societies had such strict requirements for joining?

What do you think of the pledge new Christian Endeavor members were required to sign?

You can read more about Isabella’s involvement with Christian Endeavor in these previous posts:

A Chorus of Four-thousand Voices

There’s no question that Chautauqua Institution had far-reaching influence over the people who attended the summer assemblies at the turn of the Twentieth Century. But one of Chautauqua’s traditions—the Chautauqua salute—transcended the Institution grounds and became popular across the country.

But outside the Institution, in towns and villages across America, the Chautauqua salute caught on and became something of a sensation.

When President Theodore Roosevelt arrived in Tacoma, Washington he was greeted by a crowd of 30,000 people waving their handkerchiefs in a Chautauqua salute.

But American’s didn’t reserve the Chautauqua salute only for respected speakers and past U.S. Presidents. The Los Angeles Herald society page reported on a surprise birthday party for a man named Howard L. Lunt, where “the Chautauqua salute and congratulations” began the program, followed by “dainty refreshments.”

Another 1904 news article told of a group of Christian Scientists who gave the Chautauqua salute to Mary Baker Eddy … who didn’t seem to appreciate the gesture. 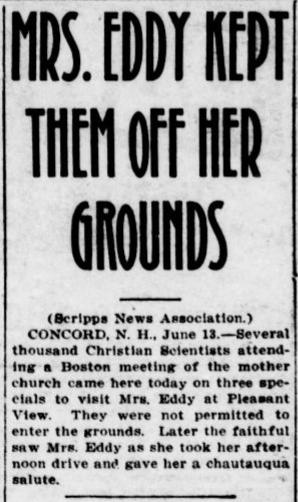 And a Colorado newspaper reported baseball fans used the Chautauqua salute to cheer for their team after neighbors near the playing field complained about the noise during Sunday games.

Not everyone thought giving the Chautauqua salute was a good idea. By 1912 the U.S. Public Health Service (the precursor of today’s U.S. Department of Health and Human Services) began warning the public of increased health concerns caused by crowds of people waving handkerchiefs.

For the most part, Americans ignored the warnings and kept enthusiastically fluttering their handkerchiefs, sometimes with comic results: