James Montgomery Flagg was an American artist whose illustrations and paintings appeared in newspapers, magazines, and books in the early 20th century. At the same time Isabella Alden wrote about women making their way in the world, James Montgomery Flagg told similar stories through his art.

In 1912 James Montgomery Flagg published “The Adventures of Kitty Cobb,” a serial story told in pictures. For 25 weeks the serial ran in the Sunday edition of major newspapers across the U.S. Each individual illustration told a chapter of Kitty Cobb’s story, as she struggled to make a new life for herself in the big city.

Kitty’s story began when she left her home town of Pleasant Valley for New York, where she hoped to find a job:

Soon after arriving in New York, Kitty learned how vulnerable a woman alone can be as she looked for a job and a place to live.

Like Constance Curtiss in Isabella’s book Pauline, Kitty had to fend off the unwanted attentions ill-intentioned men: 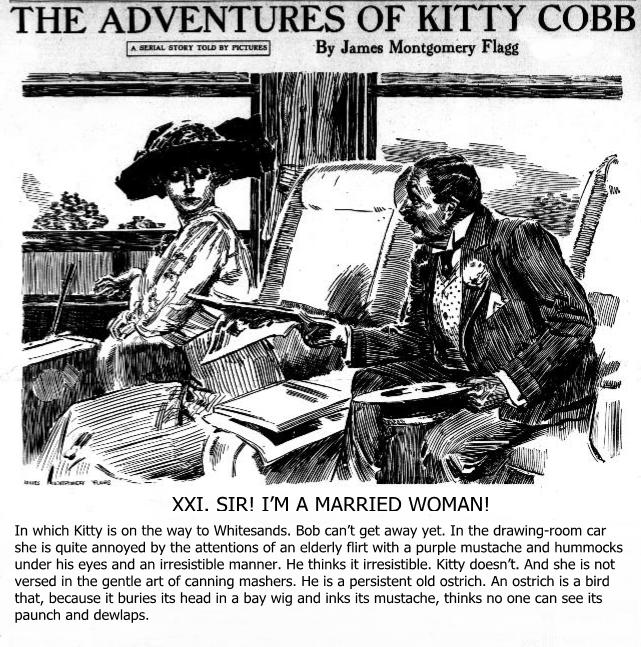 Since laws at the time favored employers, a woman like Claire Benedict in Interrupted could be denied a job based simply on her looks or the employer’s prejudice. James Montgomery Flagg illustrated the same situation in Kitty Cobb:

“The Adventures of Kitty Cobb” proved so popular with readers, advertisers rushed to tie their products to Kitty’s story.

You can view all 25 installments of “The Adventures of Kitty Cobb” on Isabella Alden’s Pinterest page.