During Isabella’s lifetime, sewing and needlework were part of a woman’s daily life.

In her novel Workers Together; An Endless Chain Joy Saunders’ workbasket includes a “small gold thimble and her own blue needle-case.”

Some of Isabella’s female characters, like Mrs. Bryant, sewed every day because that’s how they earned their living.

Other characters, like wealthy Miss Sutherland, plied their needles to create fancy table linens and delicate trims, like ruffles and laces.

In Isabella’s stories, thimbles were sometimes utilitarian—little more than tools to accomplish a task.

An example is in Ester Ried’s Namesake (Book 7 of the Ester Ried Series), when the president of the Ladies’ Aid Society called the meeting to order by “tapping with her silver thimble on the table.” 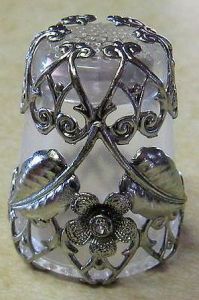 Other times, Isabella used thimbles help us understand how a character was feeling, as in this description of Helen Randolph in Household Puzzles:

Helen was in absolute ill humor. Some heavy trial had evidently crossed her path. She sewed industriously, but with that ominous click of the needle against her thimble, and an angry snipping of her thread by the pert little scissors, that plainly indicated a disturbed state of mind.

More often than not, though, thimbles appear in Isabella’s stories in very sweet ways. One example is in Miss Dee Dunmore Bryant, when little Daisy Bryant’s mother surprises her with the gift of a sewing box on Christmas morning:

There had been intense excitement over that box; for, in addition to the spools, and the needle-book, gifts from mother, there had gleamed before Daisy’s astonished eyes a real truly silver thimble, of just the right size for her small finger.

Another example appears in the novel, Pauline, when Mr. Curtis shows his love for his fiancé Constance by preparing a sitting-room in his house just for her:

It all looked charming to him that evening, with the departing rays of the sun glinting the needle, Constance’s needle, and touching also his mother’s small gold thimble that lay waiting. He had taken steps toward the assurance that the thimble would fit. On the day after tomorrow, when they stood here beside his mother’s chair, he would tell Constance how he had brought the gold thimble to his mother one day, and she had said, with one of her tender smiles, “I will wear it, my son, whenever I am taking stitches for you; and someday you will give it to your wife, and tell her from me that it has taken love stitches for you all its life and must always be kept for such service.”

Sometimes thimbles play a role in building bridges between Isabella’s characters, as in A New Graft on the Family Tree.

When Louise Morgan and her new husband move in with his family, she has difficulty winning over her resentful new mother-in-law, until she realizes they have a common interest: Needlework.

Presently she came, thimble and needle-case in hand, and established herself on one of the yellow wooden chairs to make button-holes in the dingy calico; and, with the delicate stitches in those button-holes, she worked an entrance-way into her mother-in- law’s heart.

Rebecca Harlow Edwards finds herself in the same situation (in Links in Rebecca’s Life). She and her new husband live in the same house with her mother-in-law, and in the early days of marriage, Rebecca struggles to find a way to fit in. So, one afternoon . . .

. . . about the usual hour for calls, she went daintily dressed in a home dress for afternoon, and with a bit of sewing-work in hand, and tapped softly at the door of her mother’s room.

“Are you awake?” she asked, “and are you ready to receive calls, because I have come to call on you?”

“Really,” Mrs. Edwards said, half rising from her rocker, and looking bewildered, “this is an unexpected pleasure! Am I to take you to the parlor, where I usually receive my calls?”

“No,” Rebecca said, laughing, and trying to ignore the quick rush of color to her face. “I am to be a more privileged caller than that. I have brought my work, and intend to make a visit. I used to go to mother’s room and make a call very often.”

The elder Mrs. Edwards was almost embarrassed. It was very unusual for her to have any such feeling, and she did not know how to treat it.

Rebecca, however, had determined to pretend, at least, that she felt very much at home. She helped herself to a low chair and brought out her thimble, and challenged her mother-in-law at once to know whether her work was not pretty. As she did so, it gave her a strange sense of her unfilial life, as she remembered that that same bit of work had been the resort of her half-idle moments for some weeks, and that yet she had never shown it to Mrs. Edwards before.

It proved to be a lucky piece of work. It gave Mrs. Edwards an idea, and suggested a line of thought that was so natural to her that she forgot the embarrassment of the situation at once.

It’s a sure bet that Isabella Alden was herself a sewer. She may have plied her needle to hem an everyday handkerchief, or she may have used her talents to create fancywork items for her home. But it’s a testament to Isabella’s skill as a story-teller that she could make a simple, everyday item like a thimble figure so prominently in some of the most important scenes in her novels.

How about you? Do you enjoy sewing? Do you use a thimble when you sew? Is it plain and utilitarian, or decorative? Old or new?