The heroine in an Isabella Alden book was a strong woman. She may not have known how strong she really was; but when trouble struck, it was the heroine of the story who stepped up and took action in order to save the family.

That’s what Claire Benedict did in Interrupted. She bravely took on the responsibility of supporting her mother and sister by taking a job as a music teacher in a far-away city.

In Four Mothers at Chautauqua, Isabel Bradford also decided to teach. She opened a School of Expression where she taught physical exercise techniques and grace of movement to women in New York City. 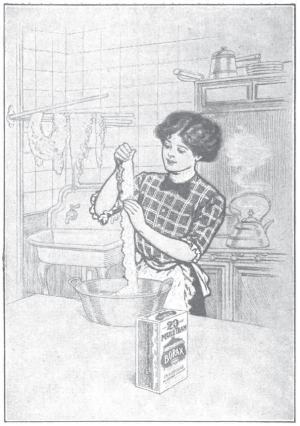 And in Pauline, Constance Curtiss supported herself (after rashly running away from her husband) by offering a variety of homemaking services, from laundering cuffs and collars to canning fruits and vegetables for busy housewives.

At the time Isabella’s books were written, women, as a rule, weren’t trained to take their place in the business world. They couldn’t vote and in many states they couldn’t own property. It was unusual for a woman to own her own business and even more unusual for her business to  succeed.

Starting a business that involved working in other people’s homes—as Constance Curtiss did—or opening an exercise studio—which was Isabel Bradford’s plan—may have been viable for some women; but for a few Alden heroines, working outside the home posed a problem. For starters, opening a shop or renting studio space required investment capital, as this ad in a 1908 edition of The Delineator magazine shows:

In other instances the heroines lacked marketable skills or they had unique family responsibilities that demanded they remain at home.

That was the case with Joy Saunders in Workers Together. Her very protective mother didn’t want to see her lovely daughter toil for wages out in the world; but with hard work and clever management, Joy and her mother ran a flourishing boarding house.

In Household Puzzles and its sequel, The Randolphs, Maria Randolph supported her entire family by running a laundry business out of her kitchen.

Constance Stuart did laundry, too. In the book Pauline, Constance specialized in laundering women’s delicate lace collars and cuffs, and she had a knack for laundering worn curtains and old linens so they looked almost brand new.

And in Her Associate Members, Mrs. Carpenter earned a living by ironing other peoples’ clothes in her sparse little kitchen.

Doing laundry and ironing as a way to earn money was fairly common for women in Isabella Alden’s time. That’s because doing the laundry was such time-consuming work, even for small families, that homemakers across the country struggled to accomplish the task on their own. Modern conveniences, like wringers and ironing machines did little to ease the load.

“Monday is the washing day of all good housekeepers,” declared The Household, A Cyclopaedia of Practical Hints for Modern Homes. This book, published in 1886, promised to make washing day easier by setting out step-by-step instructions for accomplishing every phase of the task: from making starch to eradicating fruit stains and bleaching white goods.

The volume of laundry to be done was often staggering. In Victorian-age America people wore layers of clothing, beginning with long drawers and undershirts for men; corset covers, chemises, drawers and petticoats for women. Often these items were made of wool, which made them extremely heavy once they were wet.

Over these layers they wore shirts and shirtwaists, trousers and skirts, jackets and coats. Collars and cuffs gave the finishing touch to every outfit, but because collars and cuffs were easily soiled, they were changed a minimum of two or three times a day. Collars and cuffs also required the most care and skill in laundering.

Men’s collars and cuffs were heavily starched until they could stand on their own. This paragraph from The Household instructed homemakers on how to make and apply the starch:

With such heavy starch, the best laundresses knew that men’s collars and cuffs had to be ironed over a rounded form; otherwise, if ironed flat, they were likely to crack when they were fitted around the throat or wrist.

Women’s collars and cuffs were just as challenging to launder and finish. Fluted fabric was a popular detail in ladies’ fashion, and it was difficult to keep the flutes crisp and well-shaped after washing.

Laces were easily scorched if an iron was too hot and they were just as easily discolored if they were pressed with an iron that wasn’t perfectly clean.

With so much preparation required and a good deal of heavy lifting, it usually took two women working all day to get the laundry done in an average household. And if the lady of the house didn’t have a family member or neighbor to help her, she often hired a portion of the work out. 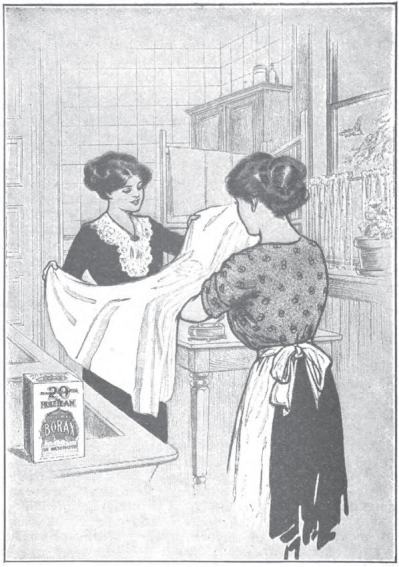 But finding a good laundress was a challenge. Isabella Alden commented on that fact in The Randolphs:

While the world seems to be full of people who are willing to teach our children to strum on the piano, to draw impossible-looking trees and people, to jabber in a dozen different tongues, the lamentable fact remains that in every town and city it is really a difficult matter to get one’s collars and cuffs starched and ironed decently without paying a fabulous price for it. 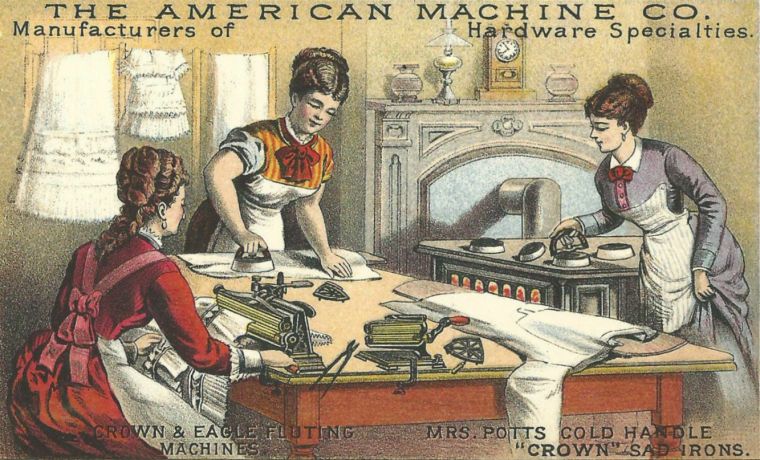 The need for an extra pair of hands on laundry day opened the door for talented and hard-working women like Constance and Maria to earn a living.

To promote her new business, Constance Curtiss washed and mended the curtains that were “just falling to pieces before our eyes” in her landlady’s house, much to the landlady’s amazement:

“The girl darned them and washed them and rinsed them in starch water and stretched them till they looked as though I had put my hand in my pocket and paid for them out of the store, as I expected to. She does beat all!”

The landlady was so impressed she told her friends and neighbors of Constance’s skill. In very short order, Constance had more work than she could handle and had to write polite notes every evening to decline any new engagements.

In Household Puzzles, Maria Randolph started her laundry business after her brother Tom told her that his co-workers admired his clothes:

Tom needed assistance in the matter of a button and was glad to find Maria at liberty for a minute to sew it on. During the operation he laughed outright at his own thoughts, and then proceeded to explain.

“One of my brother drivers came to me last night for a confidential chat. I wish you could have seen his puzzled and important face. He is that Jerry that you think is so good-natured. What do you think he wanted?”

“Well, here’s another. I couldn’t imagine what he was coming at. He called me aside and looked so important. He begged my pardon for troubling me—they are all remarkably polite to me—and he said that four or five of them had been having a time with their washerwoman because she didn’t use starch enough. They’re wonderfully particular fellows on Sunday. She ironed in wrinkles, too, he said; and then, after considerable stammering, he managed to get out that a number of them had been talking over the immaculateness of my linen, and had decided to get me to negotiate with my washerwoman, whoever she was, to see if she would do their work. The poor fellow was utterly crestfallen when I told him that my laundress was my sister.”

Industrious Maria saw an opportunity to earn money to pay for the medicine and medical care her father needed.

So she washed and ironed for the street-car drivers exactly as she had planned to do. They had few clothes to spare for the wash, but it must have been a delight to them to see the smoothness and whiteness of those few. Maria took great pains with them for two reasons: one, because she liked to hear Tom tell of their exclamations of delight, and the other, that she had a habit of doing well what she did at all. This new way of earning money was very helpful, and added not a little to the comfort of the invalid who was slipping away from them in such a quiet fashion. Sometimes it took all her resolution and a fond remembrance of how much her father enjoyed the oranges and strawberries to keep her heart in the work.

Doing a family’s laundry alone was a strenuous task and in Maria Randolph’s case, the hard, physical labor of the work took a toll on her health. But the work also had its rewards.

As Maria had a great deal of pride of execution, and an indomitable determination, and a secret plan to make herself and her father independent thereby, she worked with a will.

Before long, Maria’s business expanded enough so she could hire several “hard-working girls who were glad to be taught that which she had worked out by her own wits and the help of her eyes when she visited certain famous laundries.”

As part of their laundry duties, Maria probably taught her employees the proper way to fold clothes for customers. These plates from a laundry manual published in 1900 illustrate the correct procedure for folding drawers, shirts, and night clothes: 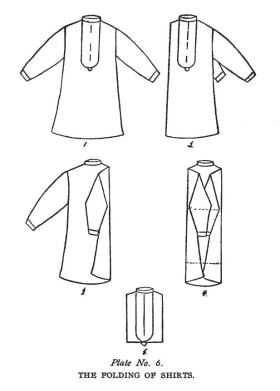 And though her family and friends were appalled when Maria decided to advertise her business, she was proud to hang a small sign outside her home, “tacked in a conspicuous spot, and the letters on it were unmistakably clear and plain:

Would you like to know more about sad irons and how they were used? Click here to view an article at Collectors Weekly.

Read our previous post about The School of Expression that inspired Isabel Bradford in Four Mothers at Chautauqua.