There were many beloved traditions at Chautauqua Institution, and Isabella Alden often described them in her books.

“Do you know the Chautauqua salute?”

Burnham Roberts asked the question of Hazel Harris in Four Mothers at Chautauqua.

“Then you understand what a strange effect is produced by the simultaneous flutter of countless white handkerchiefs. Can you imagine what it would be to see at least five thousand of them held aloft motionless for a single solemn minute, the only sound in the great assembly coming from the great organ softly tolling out a requiem? That is the way they paid tribute to the Bishop’s co-laborer, and to other great souls who put their shoulders to the wheel in the early days of the enterprise. I never saw a more impressive sight in my life.”

And in The Hall in the Grove, Carolyn Raynor was enchanted upon seeing the Chautauqua salute for the first time:

Well she might exclaim. To one like her who had never seen it before, the sight was simply glorious; and to one who has never seen it at all, the effect is indescribable; yet the cause was simple enough. A flutter of what looked like millions and millions of white handkerchiefs!

“A summer snow-storm down among the flowers and the grasses and the full-leaved forest trees,” said Caroline.

In The Story of Chautauqua, Jesse Lyman Hurlbut told how the salute came to be.

On the 1877 program was a speaker named Mr. S. L. Greene from Ontario, Canada. Mr. Green was deaf and mute. Reverend Hurlbut described how Mr. Greene addressed the great audience in pantomime in the Auditorium under the trees:

He spoke in the sign-language, telling several stories from the gospels; and so striking were his silent symbols that everyone could see the picture. We were especially struck with his vivid representation of Christ stilling the tempest. 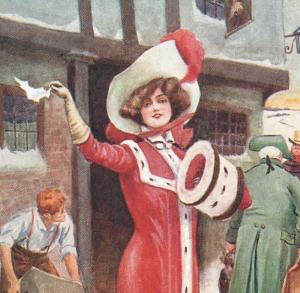 When Mr. Greene finished, the audience of “at least two thousand” burst into enthusiastic applause; but Dr. Vincent stopped them.

“The speaker is unable to hear your applause. Let us wave our handkerchiefs instead of clapping our hands.”

In an instant the grove was transformed into a garden of white lilies dancing under the leaves of the trees. Then and there the Chautauqua salute of waving handkerchiefs was adopted as a token of special honor, used only when called for by Dr. Vincent in person.

And Dr. Vincent insisted that the salute—which was a distinct and rare honor—“should be of the whitest, purest, intensest kind.” He likened the salute to lilies, and soon the gesture came to be known as The Blooming of the Lilies.

“Six thousand lily-white handkerchiefs waving a salute of honor, vigorously expressing the joy of the Chautauqua hearer, is a sight long to be remembered by those who participate therein,” wrote Reverend Hurlbut.

A crowd of ten thousand greeted Theodore Roosevelt with the Chautauqua salute when he arrived on August 19, 1899 to “preach the gospel of intelligent work” in the vast Amphitheater.

Poet May M. Bisbee was so enthralled seeing the Chautauqua Salute for the first time, she wrote a lovely poem about the experience. Click on the image to see a larger version you can read and print.

Follow these links to learn more about Isabella’s books The Hall in the Grove and Four Mothers at Chautauqua.