“I have spent this New Year’s day in receiving calls,” wrote Miss Docia Myers (in Isabella’s novel Docia’s Journal). “The whole thing is a sham. I don’t believe in that sort of calls. If one could see only one’s good friends, and exchange greetings, it would be pleasant; but this passing compliments with people for whom one doesn’t care a pin, is utterly distasteful to me.”

Not everyone shared Docia’s opinion. In the mid-to-late 1800s, the tradition of paying New Year’s calls was one of the most entertaining—and least formal—of society conventions. Isabella was very familiar with the custom and wrote about it in several of her novels.

On New Year’s Day ladies—married and unmarried—remained at home to receive the calls of their gentlemen friends. The ladies dressed in their finest, and made their parlors as bright and cheerful as possible so as to welcome the gentlemen in from the cold.

Julia Ried (in Isabella’s novel of the same name) wore her very best for the occasion:

Didn’t I blossom out on New Year’s morning! Talk of Solomon arrayed in all his glory; it didn’t seem to me that he could have compared with me.

According to custom, ladies began receiving New Year’s calls beginning at 10:00 a.m. and had to be prepared to welcome and entertain any man who presented himself for the next twelve hours.

Gentlemen were responsible for calling upon every woman of their acquaintance. They could pay their calls alone, or they could join a group of friends and call upon the ladies together. The calling card below—printed especially for 1877 New Year’s calls—shows the names of six young men who made the rounds together.

The men went from house to house, their visits lasting only about ten or fifteen minutes before they were off to pay their next call. In some cases a gentleman’s visit was so short, he didn’t even take off his hat, coat, or gloves.

It was my first experience in that scene of the whisking in and out of half a dozen gentlemen at a time, so constantly followed by half a dozen more, that presently one lost one’s balance, and ceased to remember people as individuals, but as number forty-five or sixty-two, as the case might be, and, as the day whirled on, was dimly conscious of but one idea—an eager desire to reach a higher number than Mrs. Symonds or Miss Hervey, and Mrs. or Miss anybody else. I thought it delightful.

While the gentlemen discussed the weather, paid the ladies compliments, and wished them a prosperous new year, the ladies served refreshments.

Some women offered simple plates of fruits, cakes, and breads, with coffee and tea.

Fresh fruit, something of a rarity in winter, was also a welcome offering.

More ambitious hostesses set out full buffets, with a menu that might include turkey, oysters, ham, or roast beef, as well as hot side dishes. 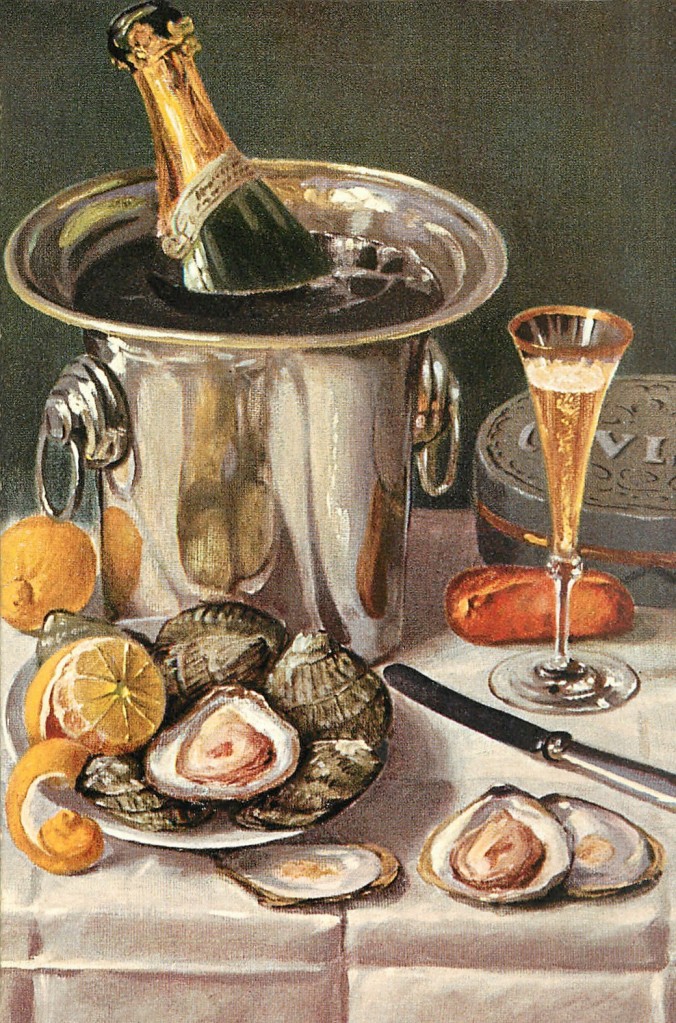 The larger the menu, the more chances it included alcohol. Ale, wine, champagne, or a festive punch made with a whiskey base were regularly served by hostesses.

It’s not hard to imagine that if a gentleman was acquainted with thirty young women and visited each in quick succession on New Year’s Day, sampling food and drinking to the health of his hostess as he went along, there was a very good chance the gentleman might be a little tipsy by the time he finished his calls that evening.

Isabella recognized that danger. In Julia Ried she wrote about a young man named Norman Mulford who called upon Julia on New Year’s Day. Norman was “a bright, handsome boy of nineteen, fair-faced, except for a slightly unnatural flush. He was fresh from college honors, and seemed almost intoxicated with triumph and wine—just the sort of a boy to be led into all sorts of temptation.”

Unfortunately, Norman couldn’t resist the temptation of the “glittering glasses and sparkling liquid” offered him by every hostess at each stop along his way that day. Norman’s loving father was deeply aware of his struggle, saying, “I would have been thankful, I think, for almost anything that would have shielded him from the dangers and temptations of this day.”

But by the time Norman visited Julia, he was feeling defiant and resentful of his father’s efforts to keep him from drinking. When Julia and her friend, Mrs. Tyndall, explained to Norman that they promised his father they wouldn’t offer him any wine, Norman’s eyes took on a “stormy glare” and “his voice shook with suppressed passion as he spoke.”

“I am very grateful to my father, I assure you. I wouldn’t have you break your promise; but, I suppose you did not also promise that I should not help myself at your hospitable table?”
Whereupon he walked directly over to the refreshment table, and deliberately poured for himself a goblet of wine, drained the glass, and then immediately made his adieus.

Norman wasn’t alone in his struggles. Many young men found that as their social circles widened, the list of calls they had to make also grew, and the number of men who finished their New Year’s calls thoroughly intoxicated became a very real problem for society.

That may be one of the reasons the practice eventually fell out of favor. By the 1900s, the custom of paying New Year’s Day calls had been replaced by the New Year’s Eve celebrations we know today.