In 1889 Isabella wrote several articles for The Pansy magazine in which she told her readers stories about her life as a young girl. Some of the stories are comical, others poignant and sad; but the common theme among all the articles was the important life-lessons she learned as a child—lessons that influenced her well into adulthood.

Here is one of those girlhood stories Isabella shared with her magazine readers (whom she dubbed her Pansies or Blossoms):

I don’t believe many of the Pansies know how to knit—old-fashioned knitting, I mean, such as we used to see so much of when I was a girl. It seems to me now as though I could not picture a winter evening without the glow of firelight from a great, wide-mouthed chimney, and a plate of red-checked apples on the table, with often a basket of nicely-cracked hickory nuts by its side, and mother’s knitting-needles flashing in the light.

All those things seem to have gone out of fashion, along with sweet old grandmothers and many other comforts.

I think I am in sympathy with a young friend of mine who said the other day, looking with a dissatisfied face at a beautifully-dressed old lady, “I shouldn’t think she would make a satisfactory grandmother.”

“Oh, I hardly know,” the frown still on her face. “Somehow she looks too nice; I don’t mean that, either. Grandmothers ought to look just as nice as possible, of course; but—well, her dress is all looped and trimmed, and has beads on, even, and her hair is crinkley, and done up in the latest style, and she doesn’t look sweet and old. I should never think of cuddling down in her neck and having a good cry, or telling her something very secret indeed; I should just sit up straight and be proper.”

Do you understand, my Blossoms? I do, and sympathize with the thought.

Well, when I was a girl I learned to knit. I do not think my mother would have considered my education complete without that knowledge. Moreover, I was fond of it. I think I liked nothing better than to get my long gray, or blue, or brown stocking out and sit down by mother and click my needles, and try to make them go as fast as hers. There was always a little shade of disappointment over the fact that I could never accomplish this; but there was also a sense of cheer over my mother’s words:

“Never mind, maybe tomorrow you can go even faster than I do. Who knows? You will be a day older tomorrow.”

That “tomorrow ” never came, it is true, but I was always looking out for it and trying to attain.

I could not have been quite four years old when I first learned to take up the small stitches skillfully, put my yarn “over,” and draw it cunningly through the loop. It was great fun, and, if the truth must be told, a great temptation. I liked it better than outdoor sports of any kind. While the other children were playing “roll the hoop,” or “jump the rope,” or “hide the slipper,” or any of the dozens of old-fashioned games which were such good sport and good exercise, I liked better to be what my father called “cooped up” in the big easy-chair in mother’s room, knitting. 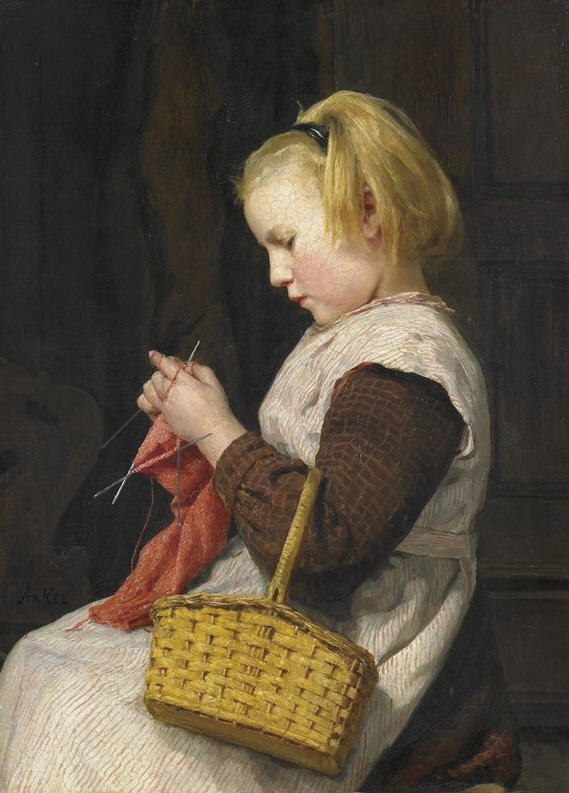 There was one thing about it that grieved me. I could not “set” the heel, neither could I take the curious back-handed stitch required after it was “set,” and it seemed to me that no sooner did I become attached to a stocking, and grow used to the “feel” of the needles, and the shape of the triangle, when it would be pronounced long enough to “set the heel,” and my pleasure in it was gone. Also I disliked the dull colors which were much in vogue in those days for stockings and socks, and often petitioned that I might make one stocking with bars of blue, and green, and yellow alternating. My mother laughed over this, and my sisters fairly shouted. But I was sure to find a sympathizer in father, no matter how queer my schemes. He fell in readily with this one.

It was mid-winter, and my playmates were wild over snow, and skates, and sleds, while I, who had been very sick, and still coughed a great deal, was of necessity housed, and just because I could not play out-of-doors, longed to do so more than ever before, and found it hard to be amused over anything. 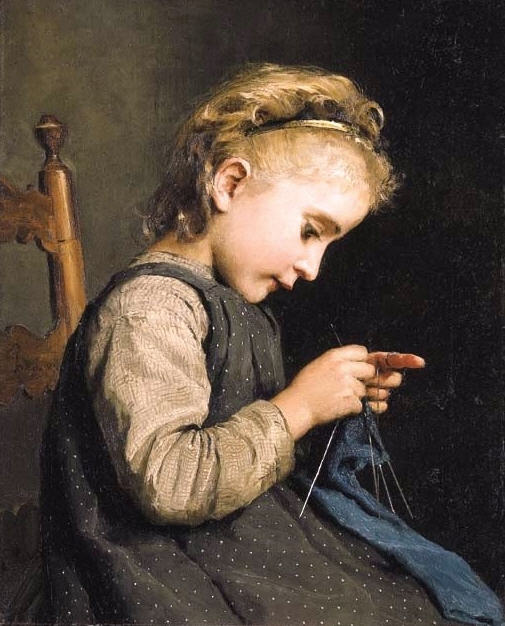 One afternoon mother produced a bright yellow ball of worsted and said, “Knit a stocking for that old giant you were reading about a while ago; he would like a yellow one, I think.”

“For the giant?” I said wonderingly. “How would I get it to him when it was done? And it would have to be very long.”

“Yes, long enough to suit you perhaps; it would be days and days before the heel would have to be set.”

“And a giant wouldn’t mind if a stitch were dropped once in a while, would he, mother?”

“Probably not,” my mother said, “though I don’t know much about the views of giants on such subjects. At least we might try him.” 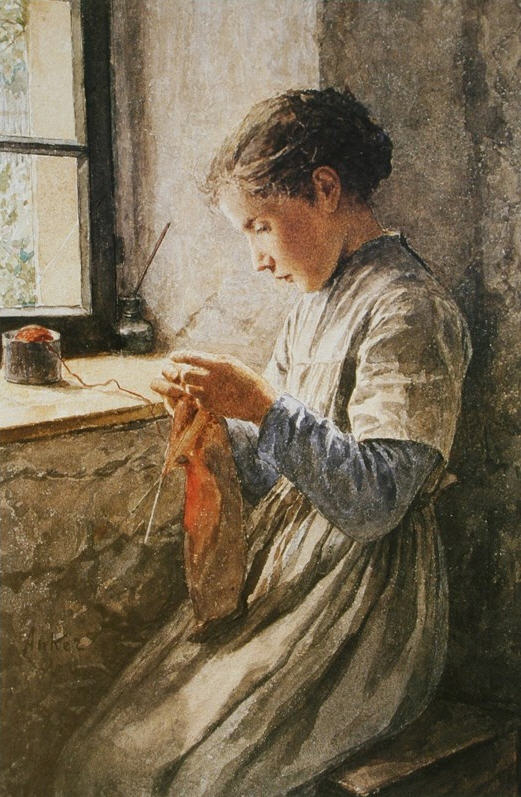 The idea pleased me, for in my secret heart I thought my mother too particular altogether in that line; just one tiny stitch which could hardly be seen at all, yet out would come the needles, and mother would relentlessly unravel the whole until she came to the weak spot. It made no difference how far I had gotten, that dropped stitch was gone after, all the same.

I remember once I said nothing about it, it was such a tiny stitch, and knitted on fast until I was a whole inch away from it. Then my conscience spoke so loud that I had to take the work to mother. But surely, I thought, she will not unravel all this out for just that one stitch!

She did, though, without a moment’s consideration, and despite the big tears in my eyes.

The giant’s stocking was commenced forthwith. I worked industriously until the yellow ball was exhausted; then a bright blue one was produced, and, delighted with the effect, I knitted fast until I had quite a strip of brilliant blue on brilliant yellow. What a pleasure it was! At last I should have a stocking which was a thing of beauty.

What delight I had in that stocking! How it grew, and grew, and changed hues from day to day until it rivaled the rainbow in brilliancy. One yard, two yards, almost three yards long, and yet stitch by stitch the wonder grew. My mother’s friends and those of my grown-up sisters became interested in it, and saved for me all their remnants of worsted, or yarn, and the brighter the color the more my heart delighted in it, nor could I be persuaded to use black at all for a long time. In vain did my sister Marcia assure me that it would increase by contrast the brilliancy of the other colors. I did not believe it, until one day she stole the stocking and knitted in a few threads of black against an intense scarlet, and astonished and charmed me with the effect.

After that I put in the blacks and dull grays with a judicious hand. The original giant for whom the stocking was commenced dropped into the background before a more brilliant thought which my father advanced—the modest one of knitting a stocking long enough to go around the world. And some day I was to start, with one end of the stocking securely sewed to mother’s wrist, the other in my hand, and walk away. If there proved to be enough of it for me to go around the world, of course in time I would get back to mother; and in case she grew weary of waiting and wanted me, she had but to take hold of her end and wind it up, when of course I would be drawn to her.

“What a little idiot you must have been!” I think I can hear you say it. Did I really believe such nonsense?

Why, not really, I suppose, and yet it afforded me such pleasure as I cannot describe, to work at my long, bright stocking with those queer plans in view. At least I worked away, and the thing grew long—very long. Also, I dropped as many stitches as I pleased, and waited not to pick them up.

Years afterwards I looked at that curious piece of work. The colors were faded, the knots were unsightly, the sometimes loose and sometimes tight knitting showed my utter lack of skill, yet in all these things I had done my best.

The thing which struck me painfully was those yawning holes where the dropped stitches had been. Yes, they were actual holes. The thing had been stretched a good deal, used as a piece bag, part of it; and the dropped stitches which seemed such small affairs had stretched also, and spread themselves in unsightly holes to say, “Look at us! Your mother warned you, but you would not believe it. You said we were too small to do any harm. You, said it was not worthwhile to go back and set us right. Now see what we are!”

Oh, the dropped stitches, not only in stockings, but in characters! Poor foolish child, who thought she knew better than mother did!

It is years and years ago. I never went on my journey around the world. Instead, my mother went away—went out of this world altogether, to that other one about which we know so much and think so little; and though the other end of my stocking is not fastened to her wrist, I know there is a strong cord named Love which goes straight from her heart to mine, and it draws me gently, steadily toward home.

Did you learn to knit, crochet, or sew from your mother or grandmother? How old were you when you learned?

Do you have a favorite knitting-lesson memory?

2 thoughts on “When Pansy was a Girl: The Knitting Lesson”