In her novels, Isabella wrote about all kinds of people: from heroic physicians to ladies of wealth and leisure; from mischievous boys to angelic little girls.

But of all the character types who appeared in her novels, the working class clerk was the most common.

Robert Parks and Hester Mason did the same in Workers Together; an Endless Chain.

Isabella seemed to have quite a bit of sympathy for these overworked, underpaid young people. Around the turn of the Twentieth Century the average man earned about $11.00 per week; but young men, like Alfred and Robert, who were just starting out in their careers, earned considerably less.

Because she was female, poor Hester would have earned only half (sometimes less) of what her male counterparts earned.

After they paid rent for their lodgings, they had little left to live on.

During the work day, when it came time for their mid-day meal break, they had to return to their lodging house for their meal, which was often included in the cost of their rent.

But if their rented rooms weren’t close to the shop where they worked, they had to find a nearby place to eat with menu items they could afford.

Luckily, some small restaurants in large cities catered to working people in that very situation.

Haim’s Quick Lunch Restaurant in New York City was one such place. Every dish on their menu was designed to be served quickly, so working clerks like Robert, Hester, and Alfred could have a simple meal and get back to work.

So what kind of dishes did Haim’s serve? Here’s their 1906 lunch menu: 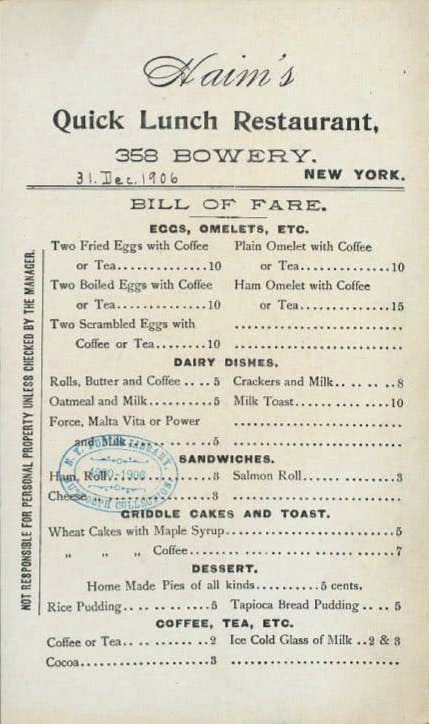 Their heartiest dishes were the most expensive. For about ten cents Alfred could have two eggs cooked to order. And Robert might have a bowl of milk toast or a sandwich.

Since Hester had to make her pitiful wages go farther than Robert or Alfred, she might have ordered one of the less expensive items on the menu, like griddle cakes.

Or she might have ordered a bowl of Force, Malta Vita, or Power, which were very much like cold cereal we eat today.

What do you think of Haim’s menu choices?

If you were a shop clerk and had only 15 or 30 minutes to grab a quick bite of lunch, which Haim’s menu item do you think you would order?

2 thoughts on “A Quick Bite to Eat”