During Isabella’s lifetime women dressed modestly. Their clothing covered them from head to toe, with high collars at their necks, long sleeves that extended to their wrists, and skirts with hemlines that brushed the floor.

With so much of the body covered, a new gown—even one with a simple design—was a big investment. The average dress in 1900 took eight to twelve yards of fabric to construct.

But even with all that fabric, women’s gowns lacked one essential convenience modern women today take for granted: pockets.

When you think about all the things we carry in our pockets—from keys and eye glasses to reminder notes and smart phones—it’s hard to imagine life without those small but handy additions to our shirts, skirts, and pants.

So how did Isabella and other women of her time carry around small but necessary objects so they were always close at hand?

They used a chatelaine.

A chatelaine was a piece of jewelry with chains from which accessories were hung.

Some chatelaines were ornate and expensive; others were purely practical.

If you watched episodes of the TV show “Downton Abbey,” you may have seen Downton’s housekeeper, Mrs. Hughes, wearing a plain and utilitarian chatelaine. 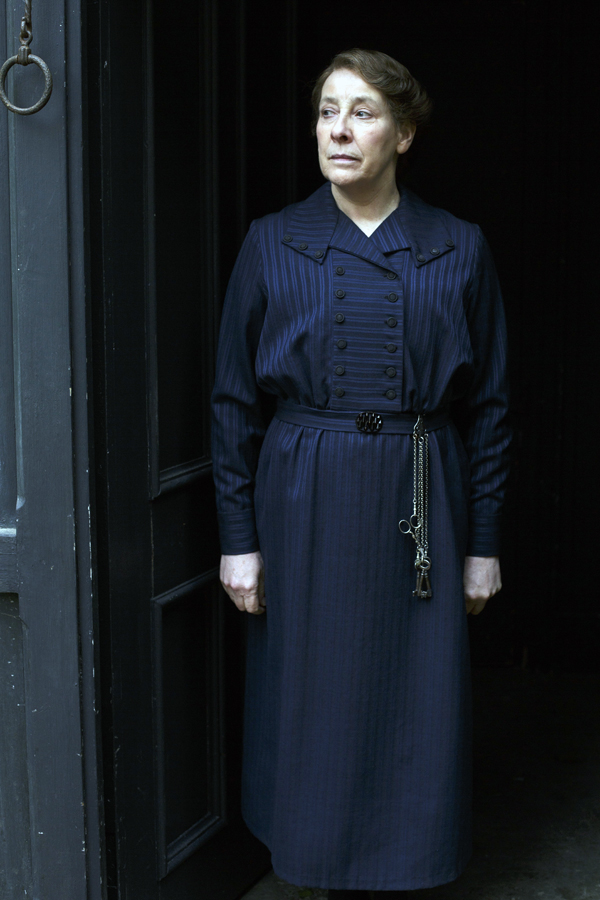 From her chatelaine she suspended a few essentials she probably used regularly throughout the day in such a large household: a small pair of scissors, and keys to the silver closet, perhaps, or maybe the wine cellar. 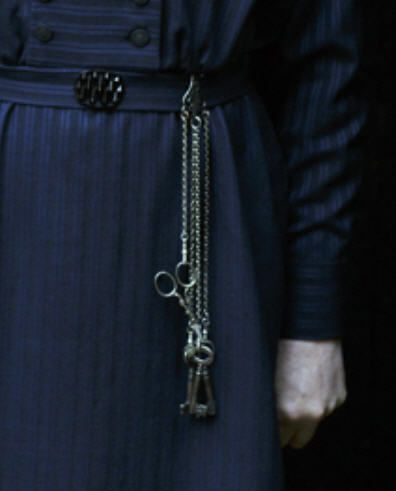 Some women customized their chatelaine for a specific purpose. For example, a seamstress or a mother who regularly found herself mending her children’s clothes might accessorize her chatelaine with needles, thread, and other sewing essentials. 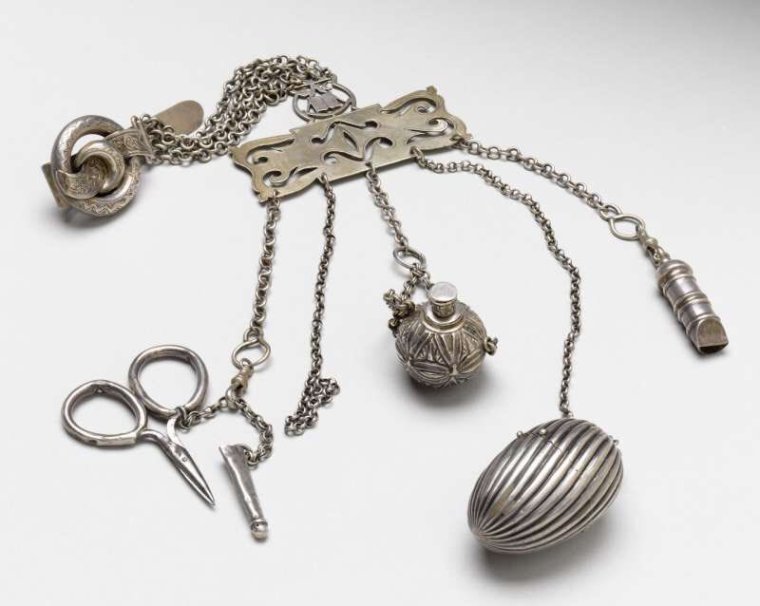 This chatelaine carried (from left to right) scissors with a protective sheath, a scent bottle. sewing kit, and a whistle.

Inside the sewing kit was a dowel with thread, a small thimble, and a cylinder for holding needles.

Here’s another example of a silver-plated chatelaine customized with five sewing tools: 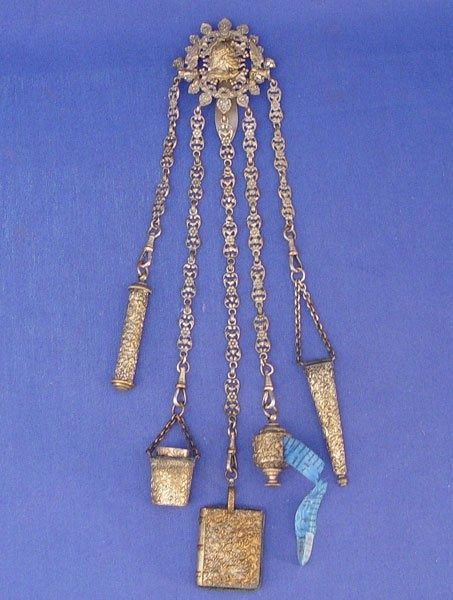 It was accessorized with a needle holder, a thimble, a pin cushion in the shape of a book, a tape measure, and a scissor sheath.

The chatelaine below was accessorized for a nurse, and contains (left to right) a pencil, an ivory notepad, pill box, scissors, tape measure, and a whistle.

Scent bottles were common components of a lady’s chatelaine. Because women’s corsets often left them short of breath or feeling faint from heat or exertion, a small bottle of smelling salts was essential.

Sometimes women filled the bottles with perfume, which they held to their nose to ward off foul odors that were common at a time before deodorants and reliable sewer systems. In such cases, these bottles were often called “vinaigrettes.”

A whistle was another common accessory. Since well-mannered ladies never raised their voices, even in times of danger or emergency, a whistle was the best way for a woman to summon help.

Many women added small bags to their chatelaines. Made of metal mesh, fabric or leather, they held handkerchiefs, coins, and eye glasses.

During Isabella’s lifetime, chatelaines were popular enough to draw criticism and comedy. One newspaper lamented the number of chatelaine accessories women were willing to wear, and printed this illustration of a wife who went a little overboard with her accessories:

The same publication poked fun at mothers who over accessorized their chatelaines:

But chatelaines came in all shapes and sizes. The lady in the photo below is dressed for the out of doors; her short chatelaine looks like a piece of jewelry and is accessorized with a watch and a whistle, among other things. 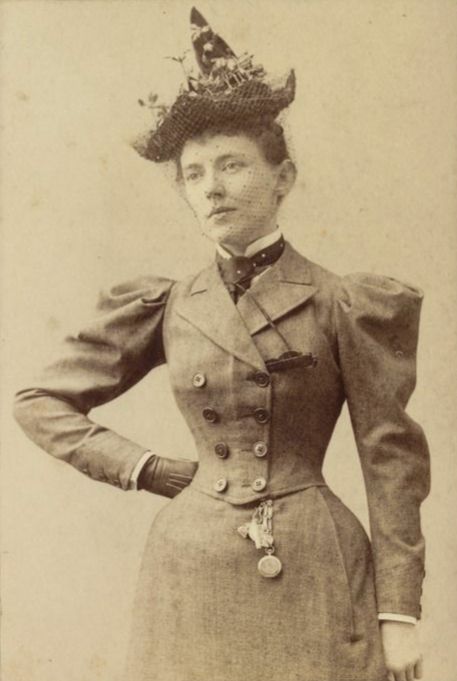 A closer look at Julia and Miss Williamson shows that both ladies were wearing small chatelaines, although it’s difficult to make out what accessories they wore. 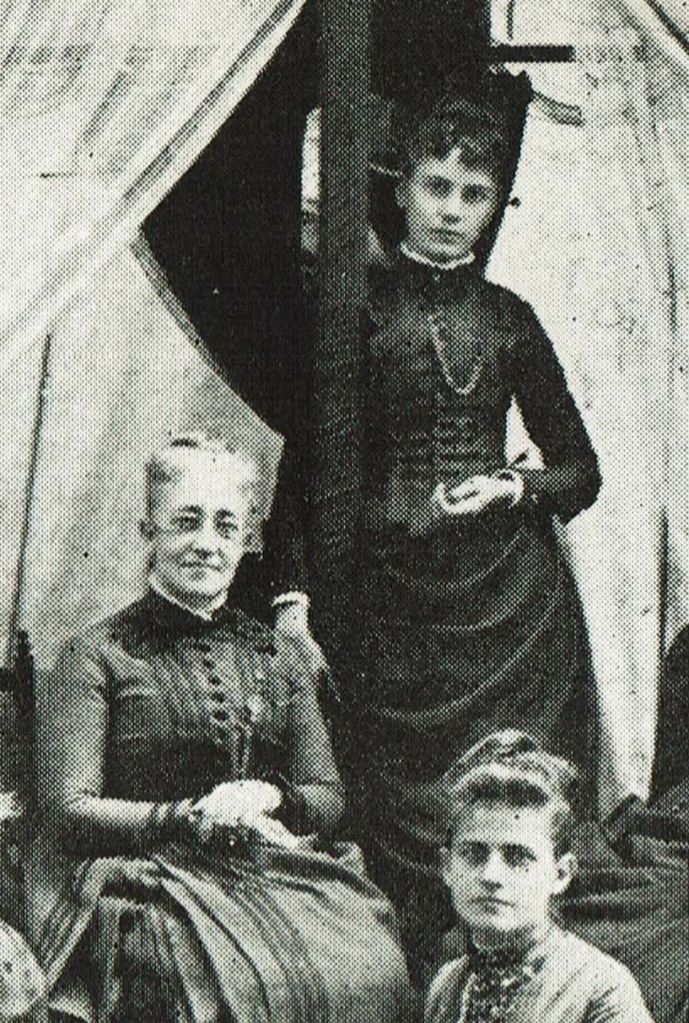 What do you think of chatelaines? Would you wear one?

If you had a chatelaine, what kind of accessories would you have?

A final note: Not all chatelaines were metal. An 1894 issue of The Youth’s Companion magazine published a simple pattern for a chatelaine you can make from fabric and ribbon. Click on the image below to see a larger version of the instructions.

6 thoughts on “No Pockets? No Problem!”