It’s the time of year when millions of Americans enjoy the out-of-doors. In Isabella’s novels, her characters spent summer days walking, hiking, and playing sports of all kinds.

A favorite pastime for Isabella’s characters was the game of croquet, and she may very well have played the game herself.

Beginning in her early twenties, Isabella made several trips over the years to the Castille Sanitarium in New York, where she was treated for health concerns. The owner of the sanitarium encouraged all her patients to play croquet, and it’s possible Isabella followed the doctor’s orders. 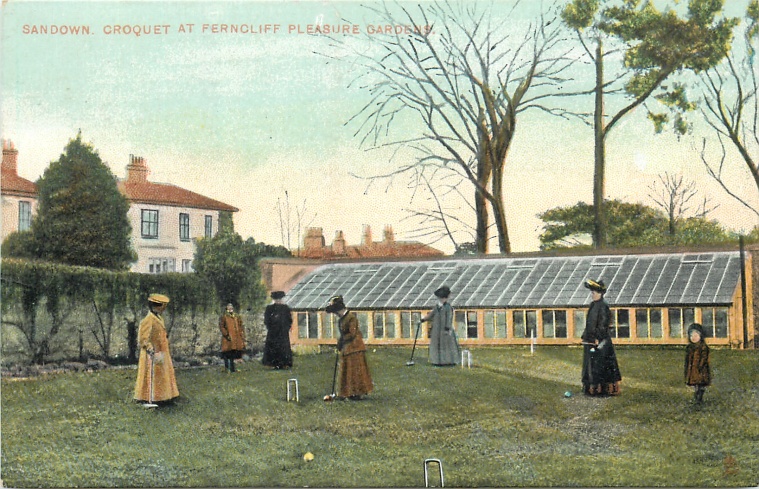 Whether she played the game herself or not, she certainly appreciated the game. In her books, characters young and old played croquet, as did the rich and poor. No matter what their circumstances, croquet brought her characters together.

In Cunning Workmen, Sunday-school teacher Mr. Hammond attends a young people’s party where he notices that Peter, one of his young charges, isn’t participating in any of the games.

“What about croquet?” he presently asked. “Miss Blake seems to be enjoying the game, and the boys are very patient in their teaching. Why haven’t you joined them?”

“I don’t quite know about them,” he said, earnestly. “I was waiting for you to come so I could speak to you about it. Them red and yellow balls look nice, and I’m most sure I could strike them through those little wires, if that’s what they’re after; but …”

“Why, they look so exactly like them billiard things that they play with down at the saloon. Tom Randolph took me in one day. He plays there a good deal, and if them things are wrong, why ain’t these?”

“But it isn’t the red and yellow balls that are at fault, you know. It is the associations. Billiard playing is generally done for money, and croquet is simply for pleasure and exercise. Isn’t there a difference?”

“Yes,” said Peter, slowly and thoughtfully, “there’s a difference. I see that.”

Leave it to Isabella to find a way to teach a lesson through a simple game of croquet!

She also used the game to show readers the motivations and mindset of her characters. That was the case with the Reverend Mr. Tresevant in The King’s Daughter, when he decided to play croquet rather than attend a temperance meeting.

Later, in Wise and Otherwise, the next book in the series, Mr. Tresevant makes a fateful decision. When a little neighborhood boy is extremely ill and lay dying in his bed, the entire town, including Dr. Douglass, went in search of the Reverend Mr. Tresevant.

Dr. Douglass’ wife later asked if he ever found the minister:

“Did you tell him about Freddy, and how much they wanted to see him?”

“I did,” relaxing into gloom and laconic answers.

“What did he say?” Mrs. Douglass was entirely accustomed to cross-questioning her husband, and understood the process thoroughly.

“That he would go down there as soon as the game of croquet was concluded.”

The lady opposite him set down her cup that had nearly reached her lips and looked at her husband, while an expression of mingled doubt and dismay spread over her face.

“Dr. Douglass! Did you tell him the child was dying, and that they had been in search of him?” she asked in shocked tones.

“I explained the latter fact to him elaborately, and told him the boy was very sick, and that I feared he might not live until morning.”

For once the ever ready tongue opposite seemed to have not a word to utter. When she found voice again, it was to ask, in a very subdued way, “Do they know it at the house—know that you have found him, I mean? What do they think of it?”

“They know that I found him—and where—for they asked me both questions. I did not enlighten them as to his occupation, and said what I hoped and believed was true, that I thought he would be along very soon; but he had not arrived when I came away, a quarter of an hour ago. The game must have proved a complicated one.”

Now, the question is, was Mr. Tresevant’s heart so bound up in the game of croquet that he could not even leave it to answer a summons from the dying?

In the novel, Isabella does go on to explain the reasons Mr. Tresevant would not leave his croquet game to pray with the family of a dying child; and in doing so, she tells us much about the state of Mr. Tresevant’s heart and soul.

In all, Isabella mentioned the game of croquet in at least nine novels. Sometimes she used the game to introduce topics of right and wrong Christian behavior, as in the discussion above from Cunning Workmen.

Other times she simply used it as a way for her characters to enjoy each other’s company on a bright summer afternoon.

How about you? Have you ever played croquet? What do you like most about the game?

You can find out more about Isabella Alden’s stay at the Castille Sanitarium in New York. Click here to read the post.

And you can find out more about Isabella’s books mentioned in this post by clicking on any of these book covers:

2 thoughts on “What About Croquet?”