Isabella’s novel The Randolphs is set in New York City. The book follows the fortunes of the Randolph siblings, all young adults who are each trying to find happiness and their places in the world.

In the story, Tom Randolph—after facing some early trouble in his own life because of alcohol—is a devoted “temperance man.”

In a conversation with his brother-in-law, Mr. Harper, Tom mentions how hard it is for young men to stay away from alcohol because of “how many places in this city it can be found.”

“Only think of the fact that, however much you might desire it, you could not find a hotel to stop at, throughout the length and breadth of this whole city, where liquor is not sold.”

“Is that actually so?” Mr. Harper said, in astonishment.

“It is really so; and not only that, but the large boarding-houses, where most of the working men who are without homes of their own have to gather, have side tables where they retail beer and whiskey. Temptation is spread on every hand, not only for those who want it fearfully by reason of an already formed taste, but for those who, because of no better place in which to spend their leisure time, are compelled to look on until they too follow the general example.”

“And your remedy is?” Mr. Harper asked, inquiringly; and there was a respectful tone in his voice. He was learning something from his young brother-in-law.

“Why, if I had the purse, I would have a temperance hotel.”

Tom’s idea of opening a hotel that didn’t serve alcohol wasn’t a new one. Temperance hotels were very popular in Great Britain and Europe, but they were almost unheard of in America.

In 1867 the Young Men’s Christian Association (YMCA) began operating an alcohol-free hotel for young men in Chicago. Besides lodgings, the Chicago YMCA offered a parlor and a library for members’ use.

Unfortunately, the Chicago YMCA burned down only a year after it opened. Though a new building was constructed in its place, it was built without any sleeping rooms.

In 1869—the same year Isabella wrote The Randolphs—a new YMCA opened in New York City with great fanfare. It housed art studios, a large library, and a lecture hall that could seat 1,500 people.

Members of the New York Y could use the services of a nearby gymnasium; and they could take advantage of a steady schedule of activities designed to offer young men wholesome entertainment. But, again, the New York YMCA was built without sleeping rooms.

Isabella would have been aware of the YMCA and the great growth the organization had enjoyed in the U.S.A. Newspapers across the country regularly printed articles about the Y, and the programs it offer young men that promoted a healthy spirit, mind, and body.

Most YMCAs had extensive libraries, billiard rooms, and well-appointed cafeterias.

They were places where young men could socialize and have fun, make friends and learn new skills, all in a “vice-free” environment.

YMCAs often reached out to young men, encouraging them to join and take advantage of the Y’s programs. This is a postcard the YMCA in Cleveland Ohio used in 1910: 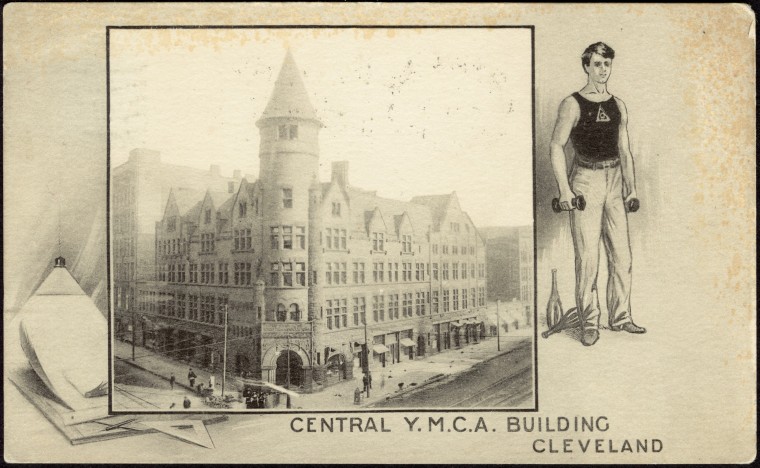 On the reverse side is a message of invitation to a young man to join one of the Y’s health classes:

Isabella knew, however, that despite all the wonderful activities and programs the YMCA offered, the Y’s influence over young men ceased the moment they left left the premises. Some young men went home to good families; but far too many went to hotels or boarding houses where liquor was served. That’s one reason she liked the idea of temperance hotels.

Some of the accommodations were similar to small hotel-like rooms with bathrooms down the hall. Others had dormitories with rows of beds in a single, large room.

The YMCA advertised their lodgings as safe and affordable. They were serviceable places to sleep, but they were far from first-class accommodations.

In The Randolphs, Tom Randolph thought it was possible to create a better Christian-based hotel.

Tom envisioned a temperance hotel that had . . .

“. . . carpets, and mirrors, and sofas, and brilliant gaslights, and the glitter of silver, and everything else that is used to entice and entrap. I would have such a place as would offer not a shadow of excuse to any living man for not stopping at the Temperance House, except the one honest reason that he wanted to go where there was rum.”

As Tom said in the story, the best way to fight Satan was with “his own weapons—if they do really belong to him.” If Satan used bright gaslights and glittering glassware to tempt men to drink in saloons, Tom would use the same to entice men into his temperance hotel.

He thought a nice hotel that offered first-class rooms and excellent service was the very thing needed to interest young men; and if the sleeping rooms were affordably priced, there would be no excuse for men to stay at any other hotel unless they specifically wanted to be able to drink alcohol on the premises.

Tom was to have his wish. In the novel, Tom was able to secure the financial backing he needed to buy an old New York City hotel and remodel it. Tom’s adventures in opening and operating the hotel soon include other members of his family, and their involvement helps drive the rest of the story.

Isabella was something of a visionary when she wrote The Randolphs. She foresaw the need for temperance hotels, just as she foresaw the welcome such establishments would receive from communities.

By the turn of the century the idea of first-class temperance hotels began to catch on in America. Some communities, like the seaside resort town of Asbury Park, New Jersey, openly invited temperance hotels to open in their town.

The YMCA recognized the need, too. The organization had always offered first-class entertainment for its members, but in the 1900s they began upgrading their residence accommodations. Newer YMCAs had residential rooms that were more spacious and home-like (although they still couldn’t be described as “luxurious”).

In 1912 the Boston YMCA began construction on their flagship location in Boston.

The building was so large, it covered almost an entire city block on Huntington Avenue. It offered men extensive classes on a range of subjects, including engineering and science. Its health education and body-building programs were the first in the nation. And its residential floors provided plenty of dormitory style sleeping accommodations for young men.

When Tom Randolph opened his temperance hotel in The Randolphs, he named the place Randolph House. Before he opened the doors for business, he ensured Randolph House was consecrated with prayer.

And he did one other thing: he remodeled the old ballroom that was part of the previous hotel. He did the work himself and kept the work secret, until he showed his sister Helen what he had done.

“What is all this for?” she asked, gazing up and down the room with satisfied eyes. The beauty and the refinement displayed here actually rested her, she was such a lover of beautiful things, especially of things that meant wealth and cultured taste and leisure to enjoy.

Then Tom unveiled the sign he intended to hang at the entrance to the remodeled ballroom:

Only then did he reveal his plan to start a branch of the YMCA at Randolph House, where young Christian men could pray, and socialize, and study their Bibles together.

In The Randolphs Isabella gave us a glimpse into her own dreams and ideals of what a first-class Christian temperance hotel might look like . . . and what it could accomplish in the lives of young men.

You can find out more about Isabella’s novel The Randolphs by click on the book cover.