In Isabella Alden’s books she often includes a character who is a “sort of” Christian. In Mrs. Solomon Smith Looking On, Laura Leonard was just such a Christian.

Laura had been brought up in a good home by good, Christian parents. She went to church every Sunday and attended Sunday-school. Laura was kind and knew right from wrong, but she had never accepted Jesus Christ as her Saviour. To the contrary, Laura rebelled against the mere thought of taking such a step . . . until Mrs. Solomon Smith helped show Laura that being a Christian and loving the Lord was the only way Laura would find real and lasting happiness in her life. 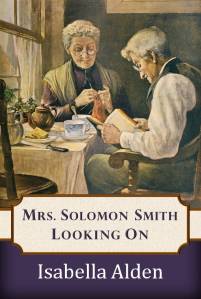 When Isabella wrote about Laura Leonard, she wrote from experience. Like fictional Laura, Isabella had been raised by loving Christian parents. She, too, attended church every Sunday, and joined the family in home worship every evening.

Beginning at a young age Isabella was carefully taught what the Bible says about who will be able to enter the Kingdom of Heaven, and that the only way to have eternal life is through Jesus Christ; yet Isabella never took the ultimate step of choosing to accept Christ as her Saviour.

Then the unthinkable happened. When Isabella was twelve years old, she fell seriously ill. For several days neither her parents nor the doctor believed she would live. But, miraculously, the crisis passed, and Isabella began to recover.

Her sister Marcia, who was nine years older than Isabella, had stayed by Isabella’s side throughout her illness. She had watched over Isabella, and slept in a chair by her bed, never leaving Isabella’s side for more than a few minutes.

When Isabella began to feel better, Marcia asked her one day:

“Would you have gone to live in heaven if God had called you when you were so ill?”

Isabella was genuinely surprised by the question, but Marcia said, “The thought of parting from you forever was one of unceasing agony to me; and my constant prayer during all those days and nights of illness was that you might be spared until you could choose Christ.”

These words made a lasting impression upon Isabella. They came to her with all the power and force of a sudden revelation: for though she had been carefully trained, and knew in a theoretical way the plan of salvation, she had never given the matter five minutes serious thought, until her sister appealed to her as she did.

Isabella tried to put the subject aside again, feeling that it darkened the day and made her uncomfortable; but the Holy Spirit had carried it home to her soul, and over and over again Marcia’s words rang in her ears.

Isabella could no longer deny the truth. She wrote, “It is not enough for me to believe in Christ as a Saviour, I must ‘choose’ Christ as my Saviour.”

Soon she began to feel that in a strange and wonderful way her sister’s earnest and loving prayer that she might be spared to “choose” had been answered. And with it came the conviction that she was compelled to make a definite choice.

Not long afterward, she did choose the Lord Jesus Christ as her personal Saviour.

What a blessed decision that was for the millions of readers of her books!

“In a few more years it will be half a century since I chose Christ. I have had abundant reason to thank God for sparing my life at that time, and for giving me a faithful sister.”

Isabella and Marcia remained close, loving sisters for the rest of their lives.

And Isabella used her experience of being a “sort of” Christian as a device to show her fictional characters—and her readers—that believing in Christ wasn’t the same as choosing to make Christ the center of one’s life.

Isabella originally shared her story of how she became a Christian in a 1901 edition Christian Herald newspaper.

6 thoughts on “Won by a Sister’s Prayers”