This is the second in a two-part series about Isabella Alden’s uncle, Horatio Gates Spafford. If you missed part 1, you can read it here.

After the loss of their children in the wreck of the Ville du Havre in 1873, Horatio and Anna’s sorrow was immense. They returned to Chicago and tried to pick up the pieces of their lives.

Their dear friend, Reverend D. L. Moody, was their greatest support and comfort. He begged Horatio and Anna to stay busy, knowing that their silent, empty house would be a great and solemn reminder of the loss of their children.

“Annie, you must go into my work,” Rev. Moody said. “You must be so busy helping those who have gone into the depths of despair that you will overcome your own affliction by bringing comfort and salvation to others.”

Two years after the tragedy, Anna gave birth to a son, Horatio, who died four years later from scarlet fever.

Then their daughter Bertha was born in 1878; two years later, in 1880, Grace was born. Both girls were healthy and hardy and brought them much joy.

But with Reverend Moody’s advice in mind, Horatio and Anna found themselves pulled in a new direction. For years they had been holding prayer meetings and Bible studies in their home at Lake View. In those meetings, they emphasized optimism and God’s blessings in their lives, despite the hardships they had endured.

With prayer and reflection, Anna became convinced that she survived the sinking of the Ville du Havre for a purpose.

Horatio, too, began to search his life and his faith for an explanation of their loss. As a result, he felt increasingly drawn to a life of service to God, and he felt called to one special place in particular: Jerusalem.

After all he had been through, Horatio wrote in a revealing letter:

“Jerusalem is where my Lord lived, suffered, and conquered, and I, too, wish to learn how to live, suffer and, especially, to conquer.”

After much prayer and thoughtfulness, Horatio and Anna decided to leave America. In 1881, when Grace was still an infant, they led a small group of like-minded American Christians to Jerusalem, where they established a Christian society known as the “American Colony.”

They found a large house in the Muslim Quarter, near Herod’s Gate; it sat high on a hill and all around the house were Muslim, Jewish and Mohammedan slums. This, Horatio and Anna decided, was the house from which they would minister to the people of Jerusalem.

They took the house, along with some property next to it that would make a nice garden; and the entire group moved in and pooled their resources to live under one roof.

It was Horatio and Anna’s vision of work to be done that gave the group direction. With the Spaffords as leaders, members of the American Colony devoted themselves to philanthropic work among the people of Jerusalem. Anyone who needed help received it, regardless of their religious beliefs.

Colony members did not preach or proselytize; instead, they first concentrated on building bridges to their new neighbors.

The American Colony provided service to others in any way they could. They ran soup kitchens, hospitals, and orphanages. They soon became trusted friends among the Muslim, Jewish, and Christian residents of Jerusalem.

One of their greatest and most enduring accomplishments was the Spafford Children’s Center, which is still run today by descendants of Horatio and Anna Spafford.

Horatio Spafford’s efforts in Jerusalem were a success. His love for the Lord transformed his personal suffering into a ministry that helped tens of thousands of men, women and children, and brought countless souls to Christ.

Life in Jerusalem was not without its challenges and hardships. One of the group’s greatest trials came from other Americans who distrusted their motives and spread horrible and sometimes ugly rumors about the group and, in particular, about Horatio and Anna. Some of those rumors persist to this day. Horatio and Anna responded to their critics in the only way they knew how: by following Christ’s instruction to turn the other cheek.

In 1888 Horatio developed a persistent fever he could not shake, and eventually the illness developed into a malignant malaria. For many days he was too weak to get out of bed; the disease sapped his strength and appetite.

Bertha was only ten years old, and Grace was eight, when Horatio, unconscious and emaciated, lay dying. Anna held his hand; and at one point, he opened his eyes and said to her:

“Annie, I have experienced a great joy; I have seen wonderful things.”

He tried to say more, but weakness overcame him, and he fell to sleep again.

Grief-stricken, Anna carried on, and sought comfort in her faith, just as she had on that horrible night at sea eight years before.

She assumed leadership of the Colony. Under her guidance, the colony swelled from 18 members to over 150. In 1896 the Colony moved to larger quarters near the Tomb of Kings in East Jerusalem.

With Anna’s guidance, the American Colony expanded its ministries, as well. They sponsored an arts club, a drama club, and a literary society, at which everyone was welcome. They even formed a concert band, and gave music lessons.

They started the Moslem Girls School, which provided a basic education, as well as vocational training to young girls, in order to provide an alternative to their culture’s traditional early arranged marriages.

They opened the doors of the house, taking in anyone who needed a place to stay, no matter their religion or ability to pay.

As Bertha Spafford, Anna’s eldest daughter, grew into womanhood, she began to play a greater role in the Colony.

My admiration for my mother was greater than all else.

In the spring of 1923 Anna was 80 years old, and her health began to fail. Bertha wrote:

The end came quietly. It was like a candle flickering and finally going out. We were determined that the only note sounded at her funeral should be one of praise for a useful life, which had been a blessing to many.

Hundreds attended her funeral service, while letters and telegrams poured in from all over the world.

Years later Bertha recalled with clarity one of the prayers spoken at the service:

Life is eternal and love is immortal;
And death is only a horizon;
And a horizon is nothing,
Save the limit of our sight!

In later years, the name of the Center would be shortened to the Spafford Children’s Center, which still operates today.

Like her mother, Bertha had a remarkable ability to see a need in her community and then work diligently to fill that need. She started an industrial school for boys and men, and a lace-making school for women and girls. During World War I she established an orphanage and foster care system for girls who had lost one or both parents through war, poverty or illness.

For over sixty years, the American Colony in Jerusalem continued the work Horatio and Anna Spafford began, and ministered to the people of Jerusalem.

Bertha led the way, always with her parents’ vision in mind. Through two world wars and many local armed conflicts, she never wavered in her work or in her selfless devotion to the inhabitants of the Holy City.

Today, the Spafford Children’s Center is still in operation, and provides medical treatment and outreach services for Arab children and their families in Jerusalem. You can read about their work on their website. Just click here.

The house that served as the American Colony’s residence still stands with its doors open. It is a thriving hotel owned by the descendants of Horatio and Anna Spafford. It’s a favorite place for journalists, diplomats, and aid workers who visit the Holy City. Some famous guests include Sir Winston Churchill, T. E. Lawrence (Lawrence of Arabia), authors Saul Bellow and John Le Carre, actors Robert De Niro and Peter O’Toole, designer Giorgio Armani, and Soviet President Mikahil Gorbachev.

In 1950 Bertha Spafford published Our Jerusalem, a wonderful book detailing her parents’ lives. In the book, she tells the story, as Anna described it to her, of the sinking of the Ville du Havre. It also includes many wonderful accounts of the good work Horatio and Anna Spafford did in Jerusalem. Our Jerusalem is a remarkable story of faith and good works, all done in Jesus’ name. You can read the book for free. Just click on the image below to begin reading. 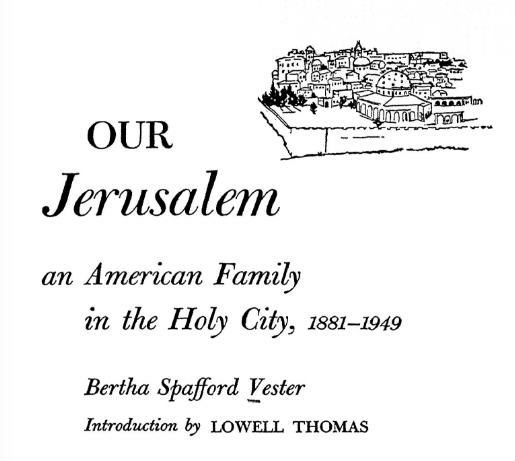