Isabella Alden considered The Hall of Philosophy one of the most beloved locations at Chautauqua Institution.

The Hall of Philosophy—sometimes called the Hall in the Grove because of its location in idyllic St. Paul’s Grove—was an open-air structure that sat under a canopy of trees that shaded and cooled the Hall during the hot summer months. It was a favorite gathering place for Chautauquans, even when no lectures were held there.

If you were a Chautauqua visitor, you could stand at the edge of the Hall of Philosophy and look out upon different views of the grounds. From one vantage point, you’d see the Hall of Christ and the spires of the different denominational chapels.

From another direction you’d see gingerbread-trimmed cottages and inviting expanses of green lawns.

The original Hall of Philosophy was designed by Bishop John Vincent for the Christian Literary and Scientific Circle (C.L.S.C.). Twenty years later, when it was discovered the building needed to be replaced in order to last for future generations, the C.L.S.C. lead a fund-raising campaign and raised the money needed to erect a new Hall of Philosophy in the same location.

For instance, the first C.L.S.C. class of 1882 was called “The Pathfinders.” Their emblem was the nasturtium and their motto was “The truth shall make you free.”

The class of 1915 adopted the name “Jane Addams” and used the American laurel as their emblem. Their motto: “Life more abundant.” 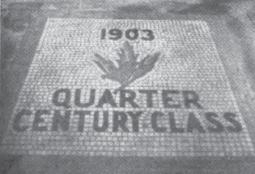 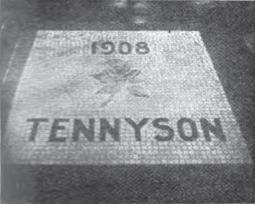 Isabella Alden was a member of the 1887 class; her fellow classmates honored her by naming their class the Pansy Class. They used the pansy flower as their emblem and “Neglect not the gift that is in thee” as their motto. 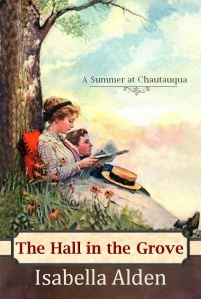 Isabella paid tribute to the Hall of Philosophy and her own experience with the C.L.S.C. in her novel The Hall in the Grove. The story centers around a diverse group of people who each spend a summer at Chautauqua for different reasons—and each end the summer changed by their experience. The Hall of Philosophy is almost another character in Isabella’s story, for it plays a prominent role in the different characters’ spiritual journeys. (You can click on the book cover to learn more about the novel.)

Thanks to the determination and rallying spirit of the members of the C.L.S.C. the Hall of Philosophy was rebuilt, and is still in use today.

This short video by Chautauqua Institution gives a brief history of the Hall of Philosophy and shows some examples of the C.L.S.C. class tiles: