In Household Puzzles, practical Maria Randolph took on the responsibility of cooking the family’s meals.

Her kitchen in 1874 might very well have looked like the kitchen in the photograph below of the Ulysses S. Grant home in Galena, IL.

The iron cook stove in the picture was typical for 1865 (nine years before Household Puzzles was published) but its fittings, including the warming oven and iron kettles, were built to last and would have remained in operation for decades.

Stoves of the period were fueled by wood or coal. To light the fuel, cooks like Maria used friction matches, commonly called lucifers. Originally, Lucifer matches were developed by a man named Samuel Jones in 1830. Like many other match manufacturers, Mr. Jones made his Lucifers with sulphur tips which were then dipped in phosphorus; but Mr. Jones’s real claim to fame was his packaging. He was the first to sell his matches in small, rectangular cardboard boxes along with sandpaper on which to strike the match. The box even included instructions (in case there was any doubt) on how to light a match.

The packaging proved so popular, “lucifer” soon became a generic name for matches.

In addition to instructions, the lucifer box also included a warning:

“If possible, avoid inhaling gas that escapes from the combustion of the black composition. Persons whose lungs are delicate should by no means use the lucifers.”

In fact, the phosphorus tips not only gave off fumes, they were deadly if swallowed. Ingesting match heads was a common method of committing suicide and small children were often accidentally poisoned by swallowing match heads.

Household Puzzles describes how Maria fumbled for the match-safe on the kitchen table and muttered “as the vile fumes of the lucifer curled into her nose.”

Maria was a smart housekeeper to hold her matches in a match safe. Because lucifers were highly combustible, they were kept in match safes made of metal. These examples of match-safes hung on the wall and kept lucifers dry, safe, and out of reach of children’s fingers. 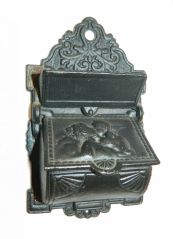 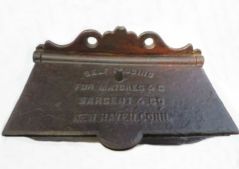 One thought on “Light the Lucifer”