n Twenty Minutes Late, Caroline Bryant’s mother supported the family by working in a canning factory during the growing season. In the winter she earned her money by sewing and taught Caroline to sew fine stitches by hand.

Watchful Mrs. Packard, who had become a good friend to Caroline, heard the sigh. “Does your mother sew on a machine?” she asked.

“No, ma’am,” said Caroline, with a slight laugh, “not very often. When she goes to Mrs. Hammond’s to sew, and to one or two other places where they have machines, she does; and this is the kind they have, and she likes it ever so much; but at home she sews by hand.”

“My land!” said Mrs. Packard, “I should think that would be hard work. She can’t accomplish very much sewing, it appears to me.”

“She does,” said Caroline firmly, “accomplish ever so much sewing. She sews hard all winter long; makes dresses and shirts and underclothing, and all sorts of things for people, taking every stitch by hand.”

“For the land’s sake!” said Mrs. Packard, “what in the world does she do it for? Nobody does that any more.”

Caroline laughed a little sorrowfully. “She does it just as we do a good many things, Mrs. Packard, because she has to; she hasn’t any machine of her own, and we children haven’t got old enough yet to buy her one; but we are going to some day. That is the first thing Ben and I are going to do.”

Mrs. Packard kept her own counsel, and Caroline went away unaware that she had said anything of special interest to anybody.

In 1893, when Twenty Minutes Late was first published, sewing machine sales were booming; and their affordability made it easy for most families to own one. No wonder, then, that Mrs. Packard was astonished that Caroline’s mother supported the family with hand-sewing.

At the time Twenty Minutes Late was written, sewing machines weren’t new. They’d been on the market for many years, particularly in commercial settings; but it wasn’t until the mid-1800s when they began to be mass-marketed to consumers.

In 1885 The Singer Manufacturing Company began selling sewing machines directly to the public for home use. Early Singer machines featured a foot-operated treadle; and in 1889 Singer introduced an electric sewing machine to consumers.

By the late 19th century, other companies were producing sewing machines for home use, as well; and most companies allowed purchases on credit, making it easier for families to obtain a machine.

This trade card touts the Royal St. John machine as the only sewing machine that can sew forward or backward:

An 1890 painting by Fritz von Uhde shows a dressmaker using an older “turtle back” sewing machine (so named because of the machine’s shape). 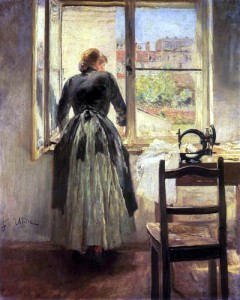 The 1908 advertisements below feature a sewing machine ingeniously marketed under the name “The Free.” The Free sewing machine was distinguished from other machines as “the only insured sewing machine warranted for life.” The company pledged to replace any machine “destroyed or injured” with a brand new machine, without cost. 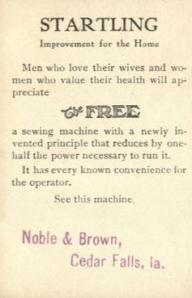 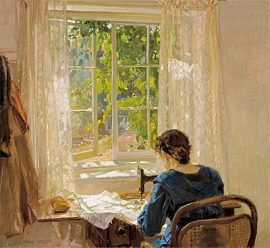 And this 1913 painting by Hans Heysen depicts a sewing machine set up beside a charming, sunny window for use by the lady of the house.

Would you like to learn more about sewing machines and the art of sewing during the 1890s and 1900s?  Follow these links for more information:

Elias Howe’s Sewing Machine – This article features a comparison of the time it took in the 19th Century to sew various articles of clothing by hand verses machine. Some of the comparisons are astonishing.

Singer through the Ages 1850-1940 – A timeline of the Singer Manufacturing Company and its innovations.